Ulster side run out 27-point winners in Round 2 qualifier 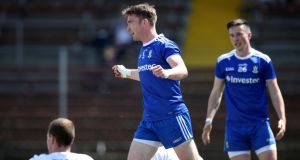 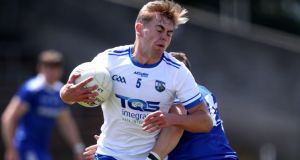 Waterford’s Brian Looby and Dermot Malone of Monaghan in action during the the All-Ireland SFC Round 2 qualifier at Fraher Field. Photograph: Bryan Keane/Inpho

Monaghan cruised to a 27-point victory over Waterford in their All-Ireland SFC round 2 qualifier clash at Fraher Field in Dungarvan.

First-half goals from Conor McManus, via a penalty, Karl O’Connell and Fintan Kelly helped Malachy O’Rourke’s side to a 3-11 to 0-4 half-time lead before substitutes Dessie Mone and Shane Carey raised further green flags after the break.

In a novel pairing, the sides were clashing for the first time ever in Championship action.

While Waterford were on a high following their morale-boosting qualifier victory over Wexford, in contrast, Monaghan were aiming to bounce back after a late upset to O’Rourke’s native Fermanagh in Ulster.

Farney captain Colin Walshe kicked his side’s first score inside the opening minute and they had built a six-point lead by the time Waterford opened their account via a Kieran Power point.

McManus was first to find the net in the 20th minute, via the penalty spot, after Ryan McAnespie was brought down in a congested Déise square.

McAnespie was a lively presence throughout, working in tandem with Jack McCarron before a speeding Karl O’Connell emerged from his left wing back slot to raise a second green flag in the 33rd minute.

The floodgates were opened as midfielders Niall Kearns and Darren Hughes kicked quick-fire points before Fintan Kelly scored his side’s third goal in first-half injury-time after a Conor McCarthy pass.

Despite being outclassed, Waterford showed admirable pride on the resumption – Jason Curry’s 49th-minute free marking the only time they hit consecutive, unanswered scores.

McCarthy kept the scoreboard ticking over for Monaghan prior to testing Waterford goalkeeper Stephen Enright, who produced a final double save only for Mone to blast home the rebound on the third attempt on 53 minutes.

Waterford were unlucky not to raise their own green flag as JJ Hutchinson hit the post on the hour mark, while Carey capped Monaghan’s win late on.

Happy to see his side get back on track, Monaghan manager O'Rourke afterwards claimed that Kieran Hughes' notable absence from the Farney match-day panel was down a hamstring injury.