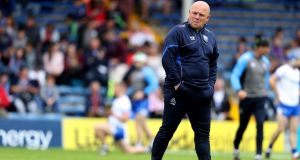 Derek McGrath has stepped down as Waterford manager but has not ruled out a return to management at some stage in the future. Photograph: Oisín Keniry/Inpho

Derek McGrath has decided to step down as Waterford hurling manager after five seasons, citing the need for a break from the game and feeling a little “burnt out” by it all.

McGrath took Waterford to last year’s All-Ireland final, where they lost to Galway by three points, and also won a National Hurling League title in 2015.

In an exclusive interview with Eamon Keane on WLR FM radio in Waterford, McGrath outlined the reasons behind his decision to step down and the emotionally charged manner of it in the aftermath of Sunday’s defeat to Cork at Semple Stadium, and a season clearly not helped by the “carnage” of Waterford injuries.

“I thought long and hard about it,” said McGrath. “I didn’t make an announcement immediately after the match, in Thurles. And I was conscious of Brick’s day as well [Michael ‘Brick’ Walsh, who made a record 74th senior hurling appearance), not to take from that.”

Asked about the reaction from the players at a post-game meeting in the Horse and Jockey near Thurles, McGrath said: “Ah, hugely emotional, to be honest. I was blubbering myself, so I think they immersed so much of their own human emotions into it, complete immersion on their behalf in the project over the five years, and we’ve grown very close.

“As is well documented I’ve been very close to some of them since age 12 from a teaching point of view . . . so a lot of tears, but over-riding all that was the ability to maybe look them in the eye.

“I was almost apologetic, like why walk away now on the back of a disastrous year in terms of ill luck, but on the back of a relatively good performance on Sunday? The evidence is that it’s still there, that it’s a very unified group.

“I was very guilt-laden like that for a while, and then just asked the boys to respect my opinion, and a number of them spoke, and we just embraced. I had a hug with each and every one of them, and thanked them from the bottom of my heart, for what they’ve done for me, for Waterford, and my own family like.”

McGrath suggested Waterford might benefit from a more “cold-headed approach” from his successor. McGrath’s two selectors.

“Look, maybe perversely, the emotive sense we created won’t be wiped out, but will be worked on long-term by someone coming in, on a more cold-headed approach, and might be of more benefit. That would be one solace I would take. That’s just being hyper-critical of myself, I’m not saying that about anyone else . . . You’re looking to the future.”

Ultimately, McGrath says, the commitment, along with his two selectors Dan Shanahan and Eoin Murphy, had become a little too much.

“Last year, when I was contemplating going on, and the commitment is massive, and that’s not overstating things, it’s a complete full-time job, simple as. And my mother’s thought was, ‘oh, I wouldn’t leave anyone else in do that job, they might win an All-Ireland, and then you’d be forgotten’.

“And I can honestly say with all sincerity, and it was clearly a mother loving her son, and doing what she felt was right for her son, but it was never a case of stepping away but wishing anything but luck to the lads going forward, and that’s important. I step away with great memories and the tightness and bond of the group in particular.

“It’s my own decision. People cite family reasons, for instance. My wife has been unbelievably supportive during the five years. She never once said you need to step away, or put more time into [the family]. It’s never even be raised in this house, but it has been raised by me, in my own capacity, as the parent, to do the more mundane things. So the pressure was coming from me, that maybe I wasn’t giving enough to that [the family].

“Also, it’s not that I’ve no more to give, but I’ve certainly saturated it, what I’ve given. I don’t think there’s any more I can give at this given time. I think I need a re-charging, at this given time, a certain sabbatical or whatever it is, and not rule out coming back into it, or management, in the future.

“Now, the temptation over the last few weeks, the injury situation, the ghost goal etc, [these are] all the things stacked in favour of us to give it one more go, I did weigh it up, but only temporarily, to be honest. I had a 15 per cent possibility in my head, but my head was certainly leaning towards needing a break, and a bit of time in the classroom as well, and I’m looking forward to that, I love teaching.

“That might be a bit off the charts for some people, but I miss school. I don’t think I’m stressed. I’m burnt out because of the expectations I place on myself, more than anyone else. In terms of energy levels a little burnt out, yes.”

Asked about his achievements with Waterford, or any regrets, he said: “I don’t think I’ve even reached that stage yet. I was about bettering ourselves all the time.”

McGrath didn’t rule out returning to the Waterford position at some point, or indeed taking up management with another county.

“I wouldn’t consider it now, or for a while anyway. I can’t rule it out completely . . . I’m just out of a job, I’m not canvassing to get back in, I can assure you of that. In terms of ambition, I’m 42 years of age. I feel like I’m 62 at the moment, but I imagine you have a few more years.”