Leesiders will meet Tipperary or Wexford in decider 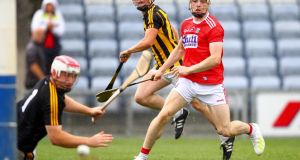 Tommy O’Connell hit 1-10 as Cork made it to the Bord Gáis Energy U-20 hurling final following a dominant performance against Kilkenny at O’Moore Park.

O’Connell’s first-half goal gave Cork the edge at the break, and despite Eoin Cody’s frees helping Kilkenny into the lead at one stage after the break, Cork finished well with points from O’Connell and Ryan Walsh proving crucial.

Cork will now face a re-run of the Munster final against Tipperary or play Leinster champions Wexford in the final.

Playing against a stiff breeze in the first half Cork got off to the dream start with the first four points of the game and O’Connell was central to much of their positive play in the opening quarter. His free and another from Brian Turnbull got Cork up and running, while Shane O’Regan also found his range after a couple of early misses.

Eoin Cody got Kilkenny on the board in the 13th minute after Eoin O’Shea forced a turnover, while Niall Brassil twice tamed the conditions to point frees for his side.

Cork’s lead was down to one point, but a lovely flick saw O’Connell get past Conor Healy after 17 minutes, and despite the efforts of Dean Mason - who had earlier denied O’Regan - his shot crept over the line for a Cork goal.

Kilkenny were excellent from there to the break though. With David Blanchfield a driving force running from defence, Brassil kept their tally mounting, while Adrian Mullen laid on the assist for Brassil just before half-time to cut their interval deficit to 1-6 to 0-8.

Cork began to struggle with the wind at their back and Kilkenny hit the first two points of the half to take the lead in the 33rd minute.

But O’Connell hit his side’s next four points, which were split by a Cody free, to edge Cork two ahead. Cody struck back to cut the lead to a point midway through the half, but Cork powered to the win with the next five points of the game, with Walsh twice finding the target in the closing stages.