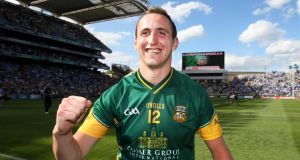 Meath’s Graham Reilly celebrates at the final whistle after the win over Dublin in the Leinster SFC semi-final in June 2010. Photograph: Cathal Noonan/Inpho

From Mayo footballers to Galway and Kerry goalkeepers to a Laois defender and an injury ravaged Roscommon icon, the GAA retirement announcements have come thick and fast this week.

For the most part, the glut of announcements on the first week of the new year appears to be down to the delayed 2020 Championships which ran right up until Christmas.

The departure of former Meath captain Graham Reilly, confirmed on Monday, is a significant one as he was one of just two remaining non-Dubliners – Ross Munnelly of Laois being the other – with a Leinster championship medal.

Reilly was Meath’s joint top scorer in 2010 when they hammered five goals past a stunned Dublin, the last time the current six-in-a-row All-Ireland champions lost in their province.

That achievement was the highlight of Reilly’s career and the hot topic since Dublin’s latest All-Ireland triumph is when we will see anything like 2010 occurring again.

Should they just split Dublin in two as many have called for?

“Me personally, I would hate to see them go Dublin North and Dublin South, or whatever way it is that people want it broken up,” said Reilly.

“I would still see Meath as a traditional county, a strong county, maybe not a very top team at the moment but we won’t stop until we get back to the top. I know the work they’re doing in Meath and they won’t stop until they’re back at the top, if that’s five or 10 years who knows but I still think you’re going to see a very strong Meath team again. I don’t know how much joy you’d take out of beating a Dublin South or a Dublin North in a Leinster final.”

Reilly’s view is that Meath are the established second best team in Leinster and with good work going on at underage level – their minors are favourites to win the Leinster final, whenever it is played – there is genuine hope for the future.

Meath last won the Leinster minor title in 2018 and while there was frustration in recent months that no under-20 management team had been appointed for 2021, to capitalise on that minor win, it looks like a crack management team will shortly be unveiled.

That looks set to be headed up by county legend Bernard Flynn with another local hero, Graham Geraghty, as a selector and current Mayo ladies boss Peter Leahy also involved.

What’s certain is that the Meath seniors will move on without Reilly, a powerful and direct scoring half forward, whose last start for the Royal County was the 2019 Leinster final loss to Dublin.

“I met Andy McEntee going into the 2020 season and he said he was excluding me from the squad but that he was monitoring my progress,” said Reilly. “I’ve a huge amount of respect for Andy and it was a man to man chat, it was just one of those things.

“I’m only 31, I don’t feel I’m over the hill or anything but he’s developing younger players and if you look at the squad, it’s mostly 25- and 26-year-olds.

“I thought last year there’d probably be no club championship and my fitness levels weren’t where I wanted when the games came around then so my big target now is to give three to five really strong years to the club. That’s going to be my focus.”

Reilly is the second Meath forward to confirm his intercounty playing days are over following the exit of Seán Tobin who didn’t feature in the 2020 Championship following three appearances in Division 1 of the league.