The 12 days of 2020: How the pandemic handed the GAA a new template 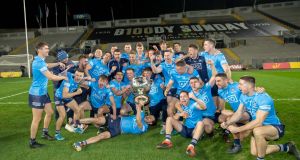 And so the year like no other ended. It may have a pretty similar companion in 2021 but there’ll hardly be the same shocks to the system. In history great upheavals frequently bring radical change – or in the terms of realpolitik, as articulated by Barack Obama’s chief of staff, Rahm Emanuel, shortly after the 2008 election: “You never want a serious crisis to go to waste.”

That will be the great legacy of 2020 to the GAA. After decades of agonising in annual reports and through the deliberations of hard-working task forces and individuals, the GAA finally hit on the solution to what the Club Players’ Association had termed ‘the fixtures crisis’.

Pandemic and lockdown forced the change and in the summer of 2020 with the return to play taking place in club championships, the benefits of the split season suddenly became obvious.

County players, unencumbered by the demands of managers, were free to train and play with their clubs and almost in unison, they declared the improvised season a resounding success.

The only change made to the concept has been to flip the season, allowing intercounty to go first and reach its finale next July and so facilitate an uninterrupted club season from late July onwards.

Barring disaster, this is likely to be the template by which GAA seasons proceed into the future.

At the end of a year best seen receding in the rear-view mirror, here’s a guide to what happened: the 12 days of 2020.

The decision to pull the All-Ireland club finals back to January was not universally popular. Ballyhale beat Borris-Ileigh and in football Corofin became the first-ever three-in-a-row club champions. Within weeks the calendar switch could be seen as serendipity on a scale comparable to Jesuit photographer Fr Francis Browne’s being ordered off the Titanic in Cobh by the Provincial of his order.

Had the finals not gone ahead 11 months ago, there would have been no club All-Irelands for two years.

At this year’s annual congress, David Hassan, chair of the standing committee on the playing rules, was again acquainted with the limitations of researched, evidence-based arguments.

“The presence of cynical fouling in hurling is well accepted,” he told congress. “Knowing that and consciously deciding to do nothing is contradictory.”

A hurricane of guff followed by the end of which the idea of a black card in hurling was rejected, 46-210. Needless to say, cynical fouling flourished as never before during the recent hurling championship.

The weekend’s league schedules have all been called off. Unbeknownst to everyone, there won’t be any intercounty fixtures for another seven months.

“At no stage have we discussed the return to training of intercounty players with any Government department so I’m kind of aghast as to where this story has come from. One thing about the playing of the games is that they’re a contact sport. Social distancing at the moment is a high priority and I can’t see contact sport coming on board in the short term,” – GAA president John Horan responds to speculation that that the Department of Sport was considering ways in which intercounty players could return to training subject to frequent monitoring in the context that planned mass coronavirus testing becomes reality.

“Obviously that’s a matter for the GAA,” – then taoiseach Leo Varadkar declaring that the All-Irelands could still take place within the terms of the Government’s publication of a five-phased plan to exit lockdown.

“Not with spectators but it could be done. I think it’s possible. You’d be talking August and September. It would be a later calendar than we’re used to.”

The GAA unveils to media the structure for a planned, truncated intercounty season due to run from mid-October all the way up until a few days before Christmas.

The first county final takes us back to Wexford where Shelamaliers beat Naomh Éanna. Matches are now behind closed doors, as coronavirus numbers climb steadily.

Controversy in Omagh as scenes after the Tyrone county final, which Dungannon Clarke’s win for the first time in 65 years, are seen to be clearly in breach of Covid guidelines. They are repeated all around the country for the next two weeks until the GAA pull the plug all outstanding county championships.

Despite the imminent imposition of Level 5 restrictions, the intercounty season is up and running with league matches over the next two weekends and the hurling championship starting on the 24th. Despite a number of league cancellations, only one county, Sligo, will be unable to take part in the championship due to Covid.

The Bloody Sunday centenary commemoration in Croke Park is widely praised on a strange weekend when the history of 1920 echoes loudly down the decades, as all four of the All-Ireland semi-finalists from that year reach the last four for the first time since.

In the Munster final Tipperary beat Cork, whose last-minute defeat of Kerry was one of the biggest shocks of the championship and in Ulster Cavan beat Donegal.

It ends this weekend. Dublin’s six-in-a-row is at the expense of Mayo – the champions’ fourth final win over the Westerners in eight years – to complete a pair of particularly dominant champions together with Limerick, both of whom are gloomily projected to continue to monopolise football and hurling.