All cycles end, just as Dublin’s will one way or another

Johnny Watterson: GAA have faced harder calls than this and reason says do nothing 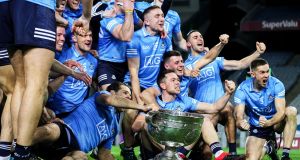 Sitting on the mind cushion watching the weekend’s sport from a now stress-free hinterland of ‘everything is banjaxed so why worry about anything?’ was oddly liberating. What happened twice in a few days was the magic of the pratfall and maybe a New Year warning that Dublin football hegemony in GAA is not infinite.

In Scotland, Rangers beating Celtic 1-0, taking them 19 points clear at the top of the league, marked the first time in a decade that they have won three consecutive games against the old rival.

The Celtic chattering class, who have won nine previous league titles in succession, seem destined to lose this one and are now babbling about the future of manager Neil Lennon. Nine-in-a-row doesn’t cut it in Glasgow.

Connacht, coming to know themselves much better and sitting on their own mind cushion, seemed more present in the RDS than Leinster were. Another run – 26 wins in the Pro14 – stopped in its tracks and Connacht winning in Dublin for the first time since 2002. Oh, joy for the other three provinces. Who were those men inhabiting the Connacht shirts?

Dessie Farrell may well be contemplating who will be the Connacht of Gaelic football as Dublin face a start to the season in February and, given their ambitions and expectations, an unprecedented final in July. Already the pitch is queered and, like last year, open to new demands.

But have those calls to tweak the county borders, to break up and weaken Dublin, died down or have we yet come to understand what happens in cycles, in persistent dominance? What happens, is that it ends. Someone or some team puts a stop to the winning streak, to the winner who can’t stop winning.

Katie Taylor’s six European Championships in-a-row and five successive World titles was a nuclear winter for others in amateur boxing. She didn’t lose a single serious fight in a decade. Then 2016 came along and she lost three fights in one year including her first in Rio to Mira Potkonen, a fighter she had never lost to before.

For Taylor, personal circumstances changed in 2016 and affected her performance. She’s now on another, a professional streak of 17-0 and undisputed lightweight world champion.

For Celtic, well Rangers entered the Third Division (the fourth tier of the Scottish football league system) for the 2012-13 season after a financial controversy. Celtic opportunity.

For Federer, who knows, and for Leinster a step off the pace and calamity. Maybe the closing door of 2020 hit Leo Cullen and his players on the way out. But no matter how strong you are, you will always run out of road.

No county is going to say they are a better team than this six-in-a-row Dublin side but there are county managers that believe their team can win. Remember how counties wryly smiled about finding All-Ireland medals in the chipper change in Dingle. In the 1970s-80s when Kerry won eight football titles in a 12-year spell, that was the telling, standing joke. Kerry were beaten too. Séamus Darby and all that.

Claims of financial doping are equally disingenuous. To hold with the pejorative term, Dublin maybe be best at it but everyone does it right down to a local sponsor buying tracksuits for the under-8s so they will feel better about themselves running out on the pitch.

But one critical reason Connacht did, and maybe Ulster can, beat Leinster is because they have cross-pollinated their squad. All the provinces have. The winning sides at the weekend, Connacht and Ulster, were laced with players from elsewhere. It didn’t diminish their sense of team or fan base connection. Connacht had almost half of the starting 15 players and Ulster with more, who did not originate in the province.

As people continue to hatch ideas of how to level the playing field among counties in Gaelic football, or from afar stymie Dublin, borrowing from the rugby model might not be a bad way out. Making allegiances to counties in a more flexible and accessible way in the GAA as the population challenges present themselves in the largest city is an ongoing issue. There is a system in existence but perhaps more lenience about movement and where players wish to go would allow for a greater number of them to fan out into other counties. It might also precipitate a greater spill over from the metropolitan area into other sides as players can make real choices.

The GAA hinterland is nothing if not evolving, modern. They’ve had harder calls than what should be done with expanding Dublin. Reason says do nothing with the city but wait. Admire them. One day they will become a stranger to themselves. Another team will step in.