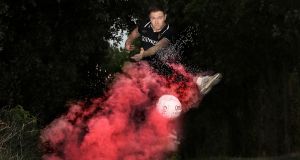 New Antrim football manager Enda McGinley believes he would need between six weeks and two months to prepare a side of a league campaign. Photograph: Dan Sheridan/Inpho

New Antrim football manager Enda McGinley believes he will need at least six weeks, and ideally two months, to prepare his team for the Allianz League.

The GAA has been forced to push back the return to training date for intercounty teams from January 15th to the end of the month, at best, but with no alteration as yet to the competitions schedule.

A letter signed off by GAA director general Tom Ryan and distributed to counties on Tuesday stated that due to the “current exceptional rise in infection rates of Covid 19” there will be no “collective training permitted for intercounty teams for at least the remainder of the month of January”.

As things stand, the Allianz Leagues are scheduled to begin on the weekend of February 27th/28th and to run until early April.

The move comes just over a fortnight after the GAA released its draft competitions schedule for 2021, a document that could yet be subject to several amendments in the coming weeks and months.

Former Tyrone star McGinley said that while the latest developments aren’t entirely unexpected, it has presented new managers in particular with a real headache as they attempt to shape their inherited panels.

Asked if he believes it’s realistic to expect teams be ready for league duty with four weeks or less of collective training, the three-time All-Ireland winner said he didn’t.

“The greatest fear coming into a new set-up is the worry of other teams getting a lead on you by not complying with regulations. That’s a classic story in the GAA, getting around training bans to keep up with the Joneses and that sort of thing.

“Personally, I’d find it really, really difficult to get a team together in four weeks. Generally, I think the longer that February 28th date stays in place then teams are going to look at how to get around the rules. Nobody wants that situation so the sooner some sort of rejigged schedule is put out there the better. I think teams can relax a bit then.”

This year’s football league has been organised on a regionalised basis with a ‘pick up’ weekend included and a provision to allow the competition run over by one week if necessary. That leeway may now be utilised given the escalation in Covid infections.

Things are a little more difficult now but can you really be complaining when you see what’s going on away from sport in wider society?

“You have to accept that the GAA are very much scrambling to keep up and to readjust, it’s a really difficult position for them,” said McGinley. “As soon as they make one plan they’re forced to adjust it. They’re making plans for the best possible scenario and Covid keeps throwing up the worst possible scenario.

“So I’d go easy on everyone in the GAA but I would say that clarity, as early as possible, is required and to be fair they’ve been very good at that all the way through. Hopefully then there’s a collective acceptance among all teams of those rules and parameters so we’re all on an even playing field.”

As a rookie manager taking his first senior intercounty position, McGinley was already up against it. He was at least forewarned of the potential frustrations that lay ahead, unlike, for example, rookie Laois manager Micheál Quirke 12 months ago.

“That’s true but at the same time we were all hoping for the last few months that we’d seen the back of Covid and that we might finally be able to start planning things again,” said McGinley. “What can you do really? Things are a little more difficult now but can you really be complaining when you see what’s going on away from sport in wider society? Everything is up in the air for everyone.”

At the beginning of the pandemic, ultra-experienced Antrim forward Paddy Cunningham declared that 2020 would almost certainly be his swansong. More recently he has confirmed he will be making himself available again and McGinley reported that no players have stepped away from last season’s group. Those are the two primary positives at this point.

“We’ve a large number of players that we’re looking at but because we haven’t been able to get together as a group, real meaningful work has been very limited,” he said. “It’s a case of looking at videos of last year’s panel, looking at club videos and the like but you can only go so far with that. You can’t be writing boys in or out based on video work.

“We’re just really limited in what we can do at the moment which is frustrating because you’re itching to get started and to get going.”