David Clarke’s retirement leaves Mayo with a hole to fill 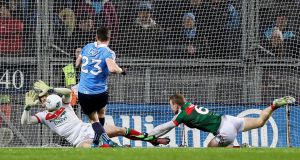 Dublin’s Paddy Andrews is denied by David Clarke straight after saving a penalty during the 2017 league encounter at Croke Park between Mayo and Dublin. Photo: Tommy Dickson/Inpho

For almost half a decade the slow trickle of Mayo’s golden generation into retirement has emitted a collective sigh from the football-mad county that remains tortured out west. Every retirement brings the county another leap closer towards facing the inevitable, towards a reality they always suspected but never anticipated: a group of the game’s greatest entertainers exciting stage left without fulfilling their destiny.

Alan Dillon’s departure from the intercounty scene in 2017 was a blow.

The retirement of former Player of the Year Andy Moran was a punch in the gut.

Ger Cafferkey, Barry Moran and any number of fellow protagonists, who persevered at the coalface for years, injected a similar feeling of mourning among the denizens of Mayo when they brought the curtain down on their intercounty careers.

The retirement of Donal Vaughan on Sunday, many will have felt, was harsh enough punishment to bear for one year.

But the news of David Clarke hanging up the red and green jersey for one final time sounded a death knell louder than any others to ring out during recent years.

Efforts can be made to replace All Star forwards, midfielders and defenders; finding somebody up to the challenge of filling these empty gloves is equivalent to finding the next Dalai Lama in Glenamoy or Ballycroy. You couldn’t be accused of recency bias to suggest the Mayo shotstopper was the greatest to ever provide the last line of defence in a county steeped in tradition, even if starved of the success it so desperately craves.

Clarke has never been anything but dependable. After joining the senior squad in 2001,  he breezed through his first two competitive games in a Mayo shirt without conceding a goal in March 2002. The 19-year-old would still have to wait in line until 2005 before finally making his championship debut. And when he did, he would have to wait another while to become a true fan favourite. That day would eventually arrive - goalkeepers must truly earn legendary status in a way that is foreign to a goalscoring corner forward.

His natural ability was evident from the day he stepped onto the pitch as a baby-faced teenager in Newbridge. That ability never abandoned him. Yet, it was his hunger and capacity to address his foibles, to ensure what was perhaps the most revolutionary period in the history of Gaelic games didn’t pass him by, that will serve as his greatest legacy, even if he has produced a highlight reel of acrobatic blocks and saves that have for so long rescued his county from the jaws of defeat.

When other goalkeepers may have succumbed to their fate, Clarke seemed to thrive on the adrenaline, as was the case when he impressively saved a Paddy Andrews penalty during a 2017 league encounter against Dublin, but followed up his heroics by saving two quickfire follow-up shots.

His willingness to evolve, though, had never been more evident than during last month’s All-Ireland decider.

For years, Mayo’s failure to capitalise on their own kickout was a problem - either rightly or wrongly - placed at the feet of the goalkeeper. Saving shots was no longer sufficient for the modern-day goalkeeper and other aspects of Clarke’s game ostensibly lacked.

That he was able to correct these issues to some degree when retirement was looming is testament to his character as both a footballer and a person. In last month’s showpiece in an empty Croke Park, Mayo won 16 of their own 18 kickouts.

The name beneath the opposite crossbar, considered to have been responsible for the evolution of the game with the kickout an immeasurably crucial aspect, only nailed 11 of his side’s restarts. To suggest that goalkeepers are solely responsible for these stats would of course be nonsensical. Likewise, to suggest Clarke didn’t have a large part to play in Mayo’s kickout strategy would also be an absurd notion.

The 37-year-old’s ability to adapt though will have come as no surprise to those familiar with his 20-year journey. He has maintained a presence within multiple eras of Mayo football – through flirtations with All-Ireland glory in the mid-noughties and recent years to a descent into mediocrity at the turn of the last decade - meaning he must boast a resilience that is unmatched by his peers.

He can carry on with life satisfied, accumulating an All-Ireland club title with Ballina Stephenites in 2005, a fistful of Connacht titles and the adoration of Mayo fans for generations to come.

Perhaps Leonard Cohen’s words can provide a nugget of solace, not that he needs it.

Clarke and his comrades didn’t manage to hit the jackpot. In many ways, retirement isn’t the end either. They have cultivated memories that will transcend generations and will be responsible for inspiring whatever talented shoots are set to emerge.

Theirs is a legacy that goes well beyond the whitewash.