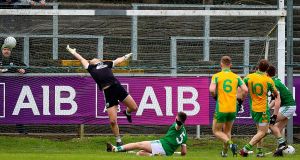 Corofin will defend their All-Ireland crown at Croke Park on St Patrick’s Day after they saw off Gaoth Dobhair at Páirc Seán Mac Diarmada in Carrick-on-Shannon on Saturday.

Former Galway forward Gary Sice was the difference as he scored 1-7 to help the reigning champions into another decider.

Kevin O’Brien’s men were 2-7 to 1-5 in front at half-time after goals from Sice and Martin Farragher. Kevin Cassidy scored the Gaoth Dobhair goal, but despite the dismissal of joint-captain Micheál Lundy on a black card Corofin held on.

Dáire Ó Baoill scored first before Sice tapped over a free to settle Corofin and when he slotted his second Corofin took a double-scores lead.

Wing back Kieran Molloy created the goal for Sice in the 16th minute. Ronan Steede’s long ball found Sice and Molloy’s shot was saved well by Christopher Sweeney, only for Sice to follow up.

Corofin were 1-4 to 0-2 ahead but Gaoth Dobhair got the next score. Naoise Ó Baoill put Christopher McFadden through, his shot was stopped by Bernard Power, but Kevin Cassidy scored the goal.

Jason Leonard (free) and Ian Burke were on target for the Galway side, but Odhrán MacNiallais, Niall Friel and Cian Mulligan moved Gaoth Dobhair back within one.

Nevertheless, Sice’s pass was fielded by Ian Burke who fed Martin Farragher and he finished over Christopher Sweeney.

Sice added another free and Corofin took a 2-7 to 1-5 interval lead.

MacNiallais and Collum scored points either side of another Sice free, and Lundy got black after he dragged down Odhrán McFadden-Ferry.

But Corofin didn’t falter and saw the game out with Sice pointing them to victory.