Both teams play better into the wind as Galway beat Monaghan 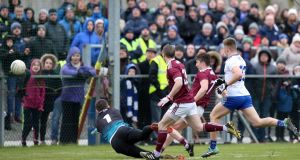 Galway’s Johnny Heaney scores the only oal of the match against Monaghan on Sunday. Photograph: John McVitty/Inpho

A fine result for Galway on a perishing afternoon in Grattan Park Inniskeen. Kevin Walsh’s side arrived as underdogs given an extensive injury list and after the opening quarter, Monaghan were so in control of this Allianz football league encounter that the visitors looked likely to take nothing from the afternoon beyond a spot of cryotherapy.

Despite facing the icy blasts of a strong wind, the home side led by a point at half-time, 0-5 to 0-4. They had monopolised possession in the first half, careful not to allow Galway too much use of the wind. They needn’t have worried excessively in the first quarter. The Connacht champions funnelled back to counter their opponents’ relentless possession game and frequently had no-one up front.

Needless to say, Monaghan did much the same when the boot was on the other foot and you could have fenced off a third of the pitch at times without unduly affecting the play.

Incrementally Monaghan built the lead. Jack McCarron shot two frees and Conor McManus - starting his first match of the campaign - nailed the other and they led by three after 12 minutes.

Walsh said afterwards that they hadn’t planned to fall back as much when asked why both teams had played better against the wind.

“It’s hard to know. We would have felt that we had no intention of going as deep as that in the first half but Monaghan had the ball in their hands in the first 15 minutes and they had runners all over the place, which dragged our boys back.

“When you are not playing together all the time you end up a bit deeper than expected. But after that I think maybe it opened up, we would have felt that with the breeze we probably left two goals and a few points behind us in the first half, so it wasn’t a case that we were back there all day.”

It was a fair point concerning the goal chances. The more glaring of the two came a couple of minutes before the break when Shane Walsh - increasingly influential in a match that initially looked to be passing him by - put David Wynne in on goal but he hit the ball wide.

Monaghan also had their chance. A slick move gave Dessie Ward a clear sight of goal but Ruairi Lavelle in the Galway goal was alert and deflected the shot out for a 45, which his opposite number, Rory Beggan then surprisingly missed.

It took Galway 20 minutes to get on the scoreboard, a fluent combination of Gareth Bradshaw, whose interception of an intended goal assist by McManus would be a critical moment in the second half, and Sean Kelly setting up Jonny Duane for the team’s first point.

The trend of the match was the familiar one of an attacking team recycling possession while the defence remained obdurately grouped in front of them. The wind militated against too much long-range kicking and so the match became a series of sustained passing movements, hoping to create an opening, exploit an error or draw a foul.

The second half would surely be the ideal conditions for Monaghan to go long with the wind - and Beggan’s prodigious boot - behind them. That script was a little discredited within seconds of the restart when Antaine Ó Laoi equalised for Galway, 0-5 each.

From the kick-out though, boom! Beggan walloped the ball up and in a trice, McManus had it over the bar. Strangely there would be very little of this direct play although a terrific two-mark sweep down the field a few minutes later culminated in McManus kicking wide.

Galway strung three points - two Walsh frees and one from play by Pádraig Cunningham together to take the scoreboard initiative and that was important in a match like this with scores so hard to come by.

The key score was the result of possession turned over by Galway in the Monaghan defence on the hour. Replacement Danny Cummins gave Johnny Heaney a run on goal and he dummied Beggan before netting the goal.

Their minds now concentrated in the Samuel Johnson sense, Monaghan set out in pursuit but five points down in the 60th minute when you’ve only managed seven so far, is an unhelpful environment for a probing, keep-ball attacks.

Still they nearly made it as Galway retreated. McManus had the final chance but it drifted wide leaving his team on two successive defeats.

Monaghan manager Malachy O’Rourke was left pondering the caprice of beating Dublin to great acclaim on day one and still being stuck on two points on day three.

“I thought we were in a good position at half-time and disappointed that we didn’t push on but it’s a tough division and if you don’t perform at your best it’s easy to lose points.”

Walsh, pleased to have got the trauma of the previous week’s cuffing in Croke Park out of their system, was frank when asked afterwards about the concept of a team’s duty to entertain.

“With the amount of work that goes into this now, people are pushing the rules to the limits to the areas where you can take it to - I’m not talking about physicality here, I’m talking about the rules. That’s life, if the opinion is that you just want to entertain then that’s fine too but you have to try and get results.”