Kerry’s winning edge down to more than minor matters 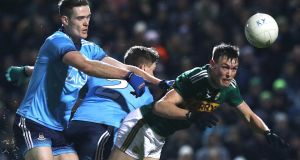 Gavin O’Brien, named to start on Saturday night in place of David Moran, came into 2019 without any winning credentials, minor or elsewhere. Photograph: Lorraine O’Sullivan/Inpho

For all the fresh harvesting of Kerry’s five-in-a-row All-Ireland winning minor run – 17 players from which have now tasted senior football – manager Peter Keane is still spreading his net a little wider.

Keane took over as senior manager last October, fresh from guiding the Kerry minors to that fifth successive All-Ireland in 2018, in what was his third season in that role. Some comparison with that golden run was always going to be natural and justified.

Only in the aftermath of Kerry’s one-point win over All-Ireland champions Dublin in Tralee on Saturday night, and particularly the question about who possibly got more out of the game, Keane was quick to point out it’s not all about those decorated youngsters. Part of Kerry’s winning edge came from elsewhere.

Tommy Walsh, their 2008 All-Ireland winner back after a three-year gap, kicked one of the second-half points that kept Kerry’s advantage; full back Jack Sherwood was also recalled by Keane this season to throw some further experience behind his youthful lines.

Then there’s Gavin O’Brien, named to start on Saturday night in place of David Moran, who came into 2019 without any winning credentials, minor or elsewhere.

“Interestingly he [O’Brien] is a guy who didn’t come through any development squad, or anything,” noted Keane, the Cahirciveen native settling nicely into his role.

“Gavin, I thought. had a reasonable county championship last year [also with Kerins O’Rahilys], a good ‘scopey’ player, good hands, good legs, and he wasn’t over-awed. So you have those young fellas coming through, and you also feed guys an opportunity to get back in there.

Still that emerging minor talent is unmistakable, beginning with 2016 All-Ireland winning minor captain Seán O’Shea, who in his opening three league games has now kicked 26 points, including another 0-8 against Dublin on Saturday night. This despite the fact that was his seventh game in 28 days, given his equally central role in UCD’s run to this weekend’s Sigerson Cup semi-finals.

And of course David Clifford, their 2018 All Star currently sitting out the league as he recovers from a shoulder operation, though still targeting an appearance in the last few rounds. There are others knocking around, including Tomás Ó Sé, named on the bench for the Dublin game.

Keane still has several other players to return, including 2014 footballer of the year James O’Donoghue, plus whoever he picks from the Dr Crokes contingent, the Munster club champions out against Mullinalaghta of Longford in this Saturday’s All-Ireland semi-final.

“We have been a bit hampered,” added Keane, “with clubs’ involvement in the All-Ireland series, some injuries too. So fellas have definitely got the chance to put up their hand, and some have taken it.

“And look at [Seán] O’Shea, played seven games in 28 days, that’s a game very four days.Between the injuries, and players involved in clubs, we’ve been tight in some ways. If you take the last three weeks, between games, sure we’ve only had one training session each week, we can’t doing anything else with them, so even picking a team you don’t even know if you have some of these lads. Dara Moynihan, we didn’t start him above in Cavan, though we felt we needed all guns on Saturday night.

“And as I said before, I’m not that concerned about the league, it’s not the big issues, the big thing was to put some structure in place, find out about players. And those young fellas, and they’ve got to find out for themselves.”