Weekend GAA previews: Kilkenny and Limerick look to get one up early 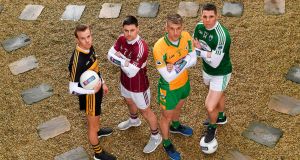 Corofin (Galway) v Gaoth Dobhair (Donegal), Páirc Seán Mac Diarmada, Carrick-on-Shannon, 1.30 (Live, TG4)
The tendency to cast Gaoth Dobhair along with Mullinalaghta, as some class of Willie Wonka significantly underestimates their credentials. One of the top clubs in Donegal, admittedly a county with a history of under-achievement in the province, they cut their way through Ulster brand leaders Crossmaglen and a clever, seasoned Scotstown team in the final. They present with a well-drilled game plan and four very experienced pivots in the McGee brothers at the back, Ódhrán Mac Niallais in the middle and Kevin Cassidy up top. Their defensive set-up, allied to fast counter-attacking took apart Crossmaglen’s confident orthodoxies and there must be a warning there for the All-Ireland champions, whose instinctive game is conventional with a deep faith in the abilities of their team, especially going forward.

Should they go all out and ship damage on the break, they’ll find the road back difficult. That said, if the Farraghers, Micheál Lundy and Ian Burke do cut loose the Donegal champions will definitely struggle, as their tactics are even less built for recovery. The champions’ experience at this level is of benefit but it has also been a feature of club championship history that this is a hard title to defend and teams with momentum and a sense of destiny can make a big impact in one season. Fascinatingly balanced – Corofin have done enough to merit getting the vote but’s it’s an anxious one.

Mullinalaghta are sufficiently hard-nosed competitors not to get carried away on all the ‘living the dream’ vapours breathed on them by an admiring island over the past two months. Wing back Shane Mulligan also made the obvious point about their date with the 2017 champions: they were given a similar chance of beating Kilmacud in the Leinster final: “We’ve always had the underdogs tag so it’s something that we’re used to and we don’t read anything into it as such. We just try to look after our own performance and our own dressing room. We’re not underestimating the task at hand with Dr Crokes. If it was Kilmacud and Dr Crokes it wouldn’t be looked on as such a foregone conclusion but it is what it is.”

It does need to be stated however that the Dublin champions would also be underdogs had they somehow kept out the late, fatal penalty in Tullamore because their performance was poor. The Longford champions will also be aware that if they concede another early goal, the Killarney Crokes won’t lose interest as easily. Mullinalaghta showed terrific composure in overcoming initial nerves as well as in Gary Rogers’s icy conversion of the late penalty. Rian Brady’s marksmanship kept them afloat and the team’s accuracy was good but there’s such firepower up front for Crokes – their entire front eight scored from play in the Munster final – and the totemic bench presence of Colm Cooper that they surely will move on to St Patrick’s Day.

UCD v St Marys, Mallow, 3.0
Two years ago, St Mary’s sensationally beat these opponents in the final on a day when UCD’s two goals in the first three minutes effectively anaesthetised them for the rest of the match. Again holders and favourites, the Dublin college will be more careful this time but their big win over DCU justifies favouritism despite Mary’s admirable defeat of a fancied Maynooth.

Cork v Clare, Páirc Uí Rinn, 7.15 (Live, eir sport 1, RTÉ 2)
It’s been a disappointing league for John Meyler with two insipid displays against Kilkenny and Wexford meaning that the cupboard is still bare. Even allowing for the absent threat of relegation and a high unavailability rate between club commitments and injury, the Cork manager would have hoped for better performances. The priority of deepening the panel suffered a setback with the news that newcomer Declan Dalton would have to undergo knee surgery. Clare responded well to their opening day disappointment by edging out Kilkenny in Cusack Park despite the Tony Kelly suspension. You’d imagine they’ll be focused for this given the disappointment of the past two Munster finals.

Laois v Offaly, O’Moore Park, 7.0
It’s come crashing down for Offaly this season with player commitment issues and now an important match against one of the counties with whom they’ll likely be in a relegation tussle. Laois look a little less doomed.

There’s been no messing with Waterford so far and even without promotion to drive them on, they’ve given short shrift to the bottom two and now face the third-last county but Carlow’s story registered uplift last time out with a hugely creditable draw against Galway. It’s likely that they’ll find Waterford more remorseless.

CBC Cork v Midleton CBS, Páirc Uí Rinn, 2.0
A red-letter day for Cork with the first Harty final between two schools from the county in a quarter of a century. Better known for its rugby activities CBC have a reached a first final, after a good semi-final win over Thurles CBS, in 101 years. Midleton are more practised and were Cork’s last winners of the cup, in 2006. More recently they lost last year’s final and a couple of players survive from then.

UCC v NUIG, Mallow
The avalanche of publicity that has accompanied the switch of the match from Saturday in order to accommodate Kieran Molloy’s club date with Corofin has deflected from what is in prospect an appetising contest. Billy Morgan’s UCC is the familiar amalgam of bright emerging talents, including current Kerry rain maker Seán O’Shea, and their ruthless demolition of IT Carlow makes them favourites but NUIG worked hard to see off Jordanstown and are well stocked themselves.

Kilkenny v Limerick, Nowlan Park (Live, TG4)
This week’s top match brings together the holders and the All-Ireland champions. Limerick have emerged for the season in more single-minded mood than maybe might have been expected and sit happily on full points after good wins in Wexford and against Tipperary. Kilkenny’s defeat in Ennis was narrow enough not to trigger much soul searching; after all, they were missing more players than their opponents. Kilkenny in the past have used league matches to send out messages to rivals and if that dynamic is no longer quite the same given that it’s the visitors who are champions, the zeal will still be there.

Wexford v Tipperary, Innovate Wexford Park (Deferred, TG4)
The disappointment of losing to Limerick should light a fire under Tipp, as they travel to the south east. The one big positive for Liam Sheedy has been the form and fitness of Séamus Callanan but a range of injuries has left his panel a bit threadbare and as he stressed in local media this week, he’s not going to throw in players less than 100 per cent fit. Wexford recovered well to beat Cork after losing at home to Limerick even though they must have felt at times like they were playing on the San Andreas Fault given the state of the surface in the now closed Páirc Uí Chaoimh. Cathal Dunbar and Diarmuid O’Keeffe were the chief finishers from play and David Fitzgerald’s team were competitive when losing to Limerick but ran out of road. Tipp’s response to losing may determine another home defeat.

Galway v Dublin, Pearse Stadium (Deferred, TG4)
Dublin’s steady start under Mattie Kenny gets its first stress test although the new manager will pack a fair amount of information about the opposition. Micheál Donoghue’s team slipped up against Carlow in one of those landmark results that will do Colm Bonnar’s side a lot more good than it will damage the Leinster champions, who should get back on track.