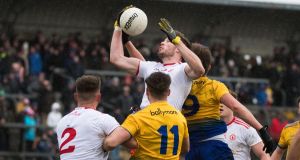 Tyrone win the contested hop ball that was an initally given as a free-in to Roscommon. Photograph: Evan Logan/Inpho

A rodeo afternoon in Douglas Hyde country finished with Roscommon contemplating life on the upper tiers of division one. But the locals headed off to enjoy what was left of a flinty day unsure of just what to think.

Yes, they scored 1-10 from play against one of the toughest defences in the land. Yet they might have lost this, held as they were to just one score, a crucial goal by Ultan Harney, in the entire second half. Against that, they were on the threshold of a famous win when substitute Gary Patterson was fouled directly in front of goal in the 75th minute.

What would have been a tap-over winner was changed to a throw-in for a retaliation in an off-the-ball moment with Tyrone goalkeeper Niall Morgan. So in the end, they Rossie’s had to be satisfied with a useful draw against the All-Ireland finalists. Mickey Harte acknowledged afterwards that it had been a harsh decision on the home team.

“But I thought it was a harsh decision when Mattie Donnelly was black carded at a vital stage in the game as well,” the Tyrone manager pointed out.

The Roscommon crowd wouldn’t have complained if the first half had gone on forever. You don’t often associate the word ‘graveyard’ with the word ‘champagne’ but the Rossie’s made them an obvious marriage as they went on a tear of sublime. Bubbly football towards the burial ground end of this big, windblown stadium.

They were aided by a strong February breeze and the shoot-with-impunity licenses clearly handed around the dressing room by Anthony Cunningham beforehand. There were periods when the directness and simplicity of Roscommon’s play felt like a how-to-do manual for the game in general, Keep it simple! Get it to a marksman! Have a crack. When you have distance shooters of the calibre of Conor Cox and Donie Smith in your side, then why not?

The game was tied at a stodgy three points each when Roscommon cut loose, reeling off seven without reply. Each score had the effect of a hot toddy on the local crowd. They grew louder and happier. The confidence spread throughout the team. When Ronan Daly landed a point from the next parish over, it felt as if Roscommon would never miss again.

In defence David Murray, Conor Daly and Conor Hussey rapaciously closed down Tyrone’s slow-burning, patient build up play and got the yellow team moving forward. The spell was ironically broken through the Primrose’ most eye-catching move: three beautifully measured passes out of defence from Evan McGrath and David Murray found Conor Devaney and he had no hesitation in letting fly. The arc of the shot was promising and the crowd had begun to warm to another spectacular point- a roar of anticipation from the stand- when it was stopped by the great paws of Niall Morgan.

The big Edendork man had an exceptional influence in Tyrone’s second half revival. He is a leading advocate of the growing Gaelic football trend of fly-keeper’s and as Roscommon found themselves increasingly corralled into a defensive shell in the second half, Morgan took up residence just short of the half way line, acting as playmaker and long range marksman. He converted two huge frees to get Tyrone going and also struck a brilliant score from play to level the teams in the 67th minute.

He had already made an exceptional stop before Ultan Harney crashed home a lobbed follow up ball from Cox in the 43rd minute.

“I’ve believed he’s quite a weapon for a while and we are seeing all of his qualities as a footballer now, never mind a goalkeeper,” said Harte, who smiled when it was pointed out to him that such adventurousness can backfire.

Tyrone had begun to make emergency changes to their back division before the first half ended and were methodical rather than inspired in their comeback. Cathal McShane’s robust turn at full forward was the brightest aspect of their attack. His fisted goal from a long delivery by Kyle Coney hauled the local attendance in Hyde Park back to the more customary mood of high anxiety.

They were 1-10 to 1-7 ahead and playing into the gale: suddenly, the minutes couldn’t pass quickly enough. Coney’s invention caused new problems even if Darren McCurry was the only Tyrone forward to manage a point from play all day. The razor-lights of summer- Niall Sludden, Tiernan McCann, Harte - couldn’t get into flow here.

Instead, they just set about manufacturing a result. Kieran McGeary had a chance to push Tyrone ahead in the 72nd minute but his shot whistled wide: Morgan was just fifteen yards behind him and eyeing up the posts in his sightlines.

“We were under pressure but really stood up to the elements and stood up the physicality and ability of Tyrone and came out winning, I thought, in flying colours against them.” Anthony Cunningham said afterwards as the rain began to batter Roscommon town and the traffic poured out of the Hyde. Both counties took as much from the day as they could.