Rebirth of football as Kerry make winning start against Dublin 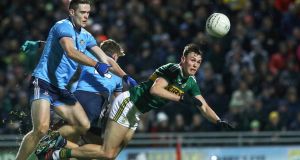 Let Charles Darwin take the blame. Just when it felt like Gaelic football was somehow in danger of extinction, it finds itself reborn with a game like this. Richness and instinct also comes in tradition.

For at least one night it also felt like survival of the fittest, and there’s nothing wrong with measuring the significance of that in the here and now. It helps when the greatest rivalry football has ever known is kept this close, and, even if Kerry ultimately needed this win more than Dublin, there’s a sense both teams left Tralee on Saturday night thrilled in the knowing of more about themselves.

“The significance of beating Dublin?” Kerry manager Peter Keane repeated the question in the calm after the storm, careful, it seemed, not to make too much of it. A winning start against Dublin, in his first season as manager, is good enough for now.

“It sounds like a cliche but every day is learning day for new management,” said Keane, “the players also getting used to us. But you’re talking about a Dublin team that’s going for five in a row this year, have won how many leagues? So every player wants to test himself against whoever is the top, even if that’s football, or running, or basketball, or what. So yeah, these fellas wanted to test themselves, see what’s in them.

“The atmosphere was electric, you could actually feel the energy come off the stand, our support, and look, it could have gone any which way. And what did we learn about Kerry? We learnt we can throw them in there! That’s how you find out about them, and a lot of them showed legs, and heart, and spirit, and stuff like that.”

Indeed they did – Kerry holding on to their advantage as the clock spilled into five minutes of injury time, only to suddenly surrender it. Up popped Cormac Costello to level it for Dublin, from a free, the first time the sides were all square since the opening minutes. Only, when a steady head was looked for, Kerry found it in replacement David Moran, one of their few surviving senior All-Ireland winners, to set up defender Peter Crowley to palm it over the bar, Kerry back in front by one.

Brian Fenton had one last chance to level it again for Dublin at the death, only his shot drifted high and left and wide.

And so much for the backstop. Both teams went after this as if there were no borders, Kerry hitting Dublin with 1-11 in the first half, every step of the game played out live and loud in front of a 11,982 sell-out crowd.

That old rivalry turned a little sour after the final whistle, players from both teams pushing and shoving in their restless farewell, before breaking away. Dublin also played the last 10 minutes with 14, Mick Fitzsimons double yellow-carded (the first one harsh), and even as Jim Gavin emptied his bench they couldn’t quite find the winner. None of the five Dublin replacements scored.

Central to Kerry’s 1-18 tally once again was Seán O’Shea, the Kenmare forward hitting 0-8 on the night, including one from play. But this victory was built from the back as much as the front, beginning with corner-back Brian Begley, hungry like the wolf for every ball that came his way, half forward Dara Moynihan, unstoppable across all borderlines, chipping in with two beauties from play.

Even if beating Dublin in the 2017 league final, last year’s 12-point dismantling in Croke Park raised fresh questions about Kerry short-term potential; this too is just their fourth league win in 11 meetings with Dublin this decade. It is, remember, also 10 years now since Kerry last beat Dublin in the championship.

On that note, Keane duly pointed out that beating Dublin or anyone else is not Kerry’s priority right now. “No, there’s no point in me worrying where other teams are – it’s about us finding out where we are. We’re after stepping onto a new train, it’s rolling very quickly, three games in 13 days, which is a huge ask.

Still, when Dublin came back at Kerry at the death, they looked to have spooked them again. Kerry hadn’t scored since the 55th minute, and then came the announcement of five minutes of injury time, at which point Kerry were hanging on to a one-point lead. Kerry had also been up by two points at the half, 1-11 to 2-6.

It started like a landslide. Jack Sherwood came up from full back to opening their scoring, O’Shea again inch-perfect with the placed ball, with Stephen O’Brien and Paul Geaney firing over beauties from play. Just over 20 minutes in they hit Dublin where it hurt, Moynihan sending in the high ball, finished brilliantly into the net by O’Brien. With that Kerry were up, 1-6 to 0-5, Dublin’s opening scores coming mainly from the frees of Dean Rock.

Then, having got two games without conceding a goal, Kerry conceded two in relatively quick succession, the first a typically brilliant solo from Con O’Callaghan, finished off his left foot, helped by a slight deflection off Brian Begley. Eight minutes later, Paul Mannion landed Dublin’s second.

With that everyone in Tralee paused for breath at the half, Kerry up by two, 1-11 to 2-6, still everything on the borderless lines. It wasn’t quite as hectic in the second half, but the physicality never let up, Paul Murphy and Tom O’Sullivan also sturdy in the Kerry defence.

Dublin goalkeeper Evan Comerford won’t want to see the DVD, gifting Kerry a point early in the second half with a miscued kick-out, tapped over by Kerry replacement Tommy Walsh. Darren Given did show further potential for Dublin, scoring from play, while Ciaran Kilkenny remains on that “to return” list.

No David Clifford for Kerry either, though, the teenager – named footballer of the year at the Kerry sports awards on Friday night – still sitting out the league as he recovers from a shoulder injury. With bigger things to come, both teams have more to give. The strongest will still survive.