Dublin look to have one trick too many for rejuvenated Mayo

James Horan’s side will match up to Dublin in places, just not all over the pitch 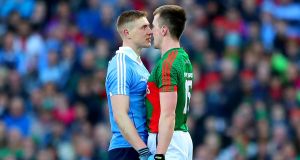 You could be forgiven for thinking of the ‘three card trick’ man when weighing up the prospects of Mayo ending their seven-match championship blank against Dublin. It’s definitely different this time. I can see the difference: younger players, rejuvenation – there, that one!

The dogged body of work that saw Mayo, frequently underrated, go blade-close to scalping Dublin in nearly all of those matches is somewhat undermined by last year’s blow-out in the All-Ireland semi-final, which ended in double digits.

It does look like an outlier, though. On each occasion that Mayo recorded big wins in 2019, against Galway in the qualifiers and Donegal in the quarter-finals, they had to face Kerry and Dublin within a week and were simply unable to find the gas to keep going.

This year actually is different. James Horan has a rookie on every line of the pitch, which whatever about the ‘sink or swim’ implications has given great energy to the team and they were genuinely impressive against Tipperary in the semi-final.

They’ve also had a conventional two weeks of rest and are unlikely to be out on their feet by the second half, as happened the last time the counties met.

There has been much focus on the 10 goal chances they coughed up but many of those arose by a stage – and a pretty early stage at that – when the match had lost all competitive tension. Apart from that, Mayo hadn’t conceded a goal all championship.

Have they any other advantages?

Any attack that puts up a record score for an All-Ireland semi-final is clearly doing a number of things right. Cillian O’Connor, setting new scoring records and showing the benefits of a good break, Aidan O’Shea, far more focused on full forward than previously, and Tommy Conroy, a livewire corner forward with pace have formed a strong collective.

They have no support. This sounds forlorn but both O’Connor and O’Shea in pre-match interviews have referred to the empty stadium in even-handed terms, acknowledging the intensity of their supporters while also accepting the advantage of taking the temperature down a few notches.

One strength they have always had is the fitness and conditioning to go toe-toe with Dublin when all else is even and unlike last year when the Dubs were able to field a shadow team the week before the semi-final.

Another less familiar advantage is that Dublin have year one management. Dessie Farrell and selectors haven’t so far had to strategise on the line under pressure – making early switches or compiling easily communicated ‘hacks’ in the dressingroom to fix system failures.

The addition of recently retired Darren Daly to the backroom is an interesting move, as the dependable former defender had already caught the attention of Jim Gavin’s management and was encouraged to give his insights as a senior player.

There are two non-negotiables for James Horan on Saturday: match-ups and kick-outs. He needs to get the first one spot-on. Dublin’s five-star generals, outfield are Brian Fenton and Ciarán Kilkenny. Undermine them and we’ve got a contest on our hands. There’s been all sorts of talk about a special ops detail for Diarmuid O’Connor on Fenton because Matt Ruane, while a fine footballer, may lack the focus to execute the task over a sustained period. Then again, will O’Connor be able to subjugate his natural game to the point where he’s simply a stopper, albeit a vital one.

Kilkenny was well marked by Lee Keegan three years ago but the task might be beyond his marker now. Back then, the Dublin man was coming from a semi-final tour de force against Tyrone where he had handled the ball an astonishing 62 times.

By tagging him aggressively, Keegan brought the numbers right down and there is a sense that Kilkenny becomes uneasy when not in possession for long periods, which makes him less suited to the inside line despite his excellent finishing.

Deployed in the full forwards in 2018, he shot 2-24 to finish as the top scorer from play in that year’s championship.

This campaign he has swapped in and out with Con O’Callaghan between the 40 and the edge of the square and is 1-16 for the four matches to date. A fundamental issue for Horan is that there are a lot of other Dublin players to mark and any slippage in the containment strategy will be costly.

Mayo’s forwards, particularly the more experienced, are great tacklers on the ball and that can pressurise Stephen Cluxton’s short kick-outs.

The problem for the Connacht champions is that they have been correspondingly suspect under more conventional restarts and the figures, albeit against a more than decent Tipperary centrefield don’t augur well with Fenton and James McCarthy available as targets.

Overall though Mayo have a history of doing better than expected on the restarts and although reluctant this year to go for the nuclear option of bringing O’Shea back to win some ball, it remains a viable emergency response.

Yet at the end of it all the problem of the tablecloth remains. Mayo can cover one end of the table or the other but the whole surface? However well they play, it just won’t fit.