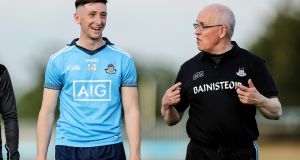 Just out of school and only 18 years of age, 10-35 seemed more like a reasonable bedtime for Ciaran Archer than a scoring haul to aspire to in last year’s EirGrid U-20 championship.

Yet those were his remarkable figures and when he struck his 10th goal, 11 minutes into the All-Ireland final against Cork, it looked like a matchwinner too.

Even at that early stage in the final, Dublin led 1-6 to no score but just seven minutes later Cork were somehow back level and the Munster champions went on to win by nine, a 17-point swing on the scoreboard.

A week and a half later, Archer reported that he was ‘still not fully over it’.

It’s 16 months and two birthdays later now and he’s back in another U-20 final, one of only two Dubliners from last year’s team - Brian O’Leary is the other - to return.

For all kinds of reasons, not least his status as reigning EirGrid U-20 Player of the Year, Archer has been a marked man in 2020 though his 1-23 return so far represents decent scoring.

“Last year was an outlier,” said Tom Gray, Archer’s Dublin manager then and now. “Leaving aside points for a moment, he scored eight, nine, 10 goals last year. No player is going to score that in football terms in a championship, it’s very, very unusual in this day and age, particularly when he’s going to be heavily marked.

“He’s developed other aspects of his game in terms of his work rate and his assists and so on. So we’re very happy with how Ciaran has developed again this year. It was never going to be the same in 2020 as it was in 2019 for him.”

Truth be told, Mark Lavin and Lorcan O’Dell have been as influential up front for Dublin this year as Archer, with O’Leary’s 1-1 in the semi-final against Tyrone the decisive blows in a tense arm wrestle. There is Luke Swan too, the dual player with power beyond his age, for Galway to contend with.

Dublin actually beat Galway in last year’s semi-finals, 2-14 to 1-10, with Archer sniping 2-6 though Gray is dismissive of the significance of that result or of the subsequent final loss.

“Absolutely no significance whatsoever,” said Gray. “Clearly for Brian O’Leary and Ciaran Archer who played in the final, and one or two others who were on the bench, it may have some personal significance but no, frankly it’s a completely different group. I personally have tried to completely and utterly forget about it and just look forward to this year.”

Donal O Fatharta, the Galway manager who was in charge of losing All-Ireland minor final teams in 2018 and 2019, from which a chunk of the current U-20 panel was sourced, has a similar take on whether those jilted minors will have extra motivation to succeed now.

“Personally, that’s not a motivation, no, I don’t think so,” said O Fatharta. “We haven’t spoke about that, it hasn’t come up. They’re young lads, they just get on with it. That is not something we addressed, ever. We addressed those defeats at the time and moved on.

“These guys want to play senior for Galway and we’re trying to facilitate that as best as we can, that’s where we’re at.”

Matthew Tierney, a back-to-back provincial U-20 medallist with Galway and an All-Ireland intermediate club winner earlier this year at Croke Park with Oughterard, is an injury concern.

The Galway senior injured his knee in the U-20 semi-final defeat of Kerry in mid-October though others who missed that game through Covid related reasons will be back.

Galway played Padraic Joyce’s seniors in a recent challenge and should they win today, it would dampen the Dublin mood a little ahead of the senior showpiece.

Interestingly, Gray believes that with all of their minor and club experience at Croke Park, the westerners could actually be the more comfortable team there.

“The Galway team probably has more experience of playing in Croke Park than we have, our players, so in that sense Galway have an advantage in terms of where the venue is,” said the Na Fianna man.

Paths to the final