Cork and Dublin set for another instalment of intriguing rivalry 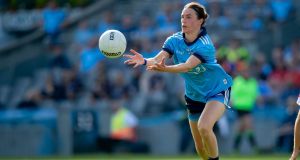 Niamh McEvoy comes into the Dublin side for Sunday’s All-Ireland final against Cork. Photograph: Morgan Treacy/Inpho

When Dublin’s Noelle Healy turned 30 earlier this month, her former Mourneabbey team-mate Ciara O’Sullivan, who captained Cork to All-Ireland victory over the Dubs in 2015 and 2016, sent her a birthday card and a voucher. “I told her it was only redeemable on the 20th of December,” she said to the Southern Star.

It’s likely, though, that come Sunday, Healy will turn up for duty at Croke Park, rather than spending the day shopping with O’Sullivan’s generous gift – there is, after all, the small matter of a four-in-a-row to be won.

There has been many an epic rivalry in Irish sport down the years, but the one between the footballers of Cork and Dublin has been something to behold, between them the counties utterly dominating the Championship for the last 16 years.

A smattering of stats: Not since 2004, when Galway won the Brendan Martin Cup, has a county other than Cork or Dublin won the All-Ireland. Cork won 11 in 12 years, between 2005 and 2016. Dublin lost three finals in a row to Cork between 2014 and 2016. Since then, Dublin have won three-in-a-row, beating Mayo, Cork and, last year, Galway. This will be their fifth meeting in a final in the last seven years, and Dublin’s seventh final in a row.

Dublin manager Mick Bohan, though, argued in the build-up to the game that all that history can be set aside, that this is a “standalone fixture” because of the nature of the year. Add in the now familiar sight of an empty stadium, the 2020 final will certainly be different, but perhaps all the more intriguing because of the circumstances.

Bohan has made just one change to the team that was pushed hard by Armagh in the semi-finals, the vastly experienced Niamh McEvoy coming in for Sarah McCaffrey, who she replaced at half-time in that game.

Captain Sinéad Aherne has recovered from the hamstring strain that forced her out of the Armagh game, the corner forward one of 12 survivors from the team that beat Galway last year to complete the three-in-a-row. Should Dublin prevail again. Aherne will become the first woman to captain her county to four successive All-Ireland titles.

Cork manager Ephie Fitzgerald has kept the faith with the 15 who started in their semi-final victory over Galway, the team including two players who have never appeared in a final before – Erika O’Shea and Eimear Kiely – as well as Saoirse Noonan who played in last weekend’s FAI Cup final for Cork City and received her first senior international call-up last month.

The final will be decided on the day – if the teams are level after extra-time, they will then take part in a 30-metre shoot-out.