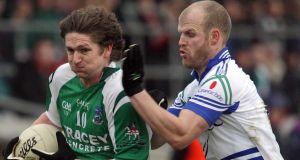 Shane O'Brien in action for Fermanagh in 2009, trying to hold off the challenge of Monaghan's Dick Clerkin. Photograph: Inpho

Fermanagh GAA has expressed its “deep sense of shock and sadness” at the death of former player Shane O’Brien (35) in a car crash at Pretoria in South Africa where he had been working with the UN Refugee Agency.

From Belleek and a member of Enniskillen’s Erne Gaels club he played with the Fermanagh minor team which reached the Ulster final in 2003 and was also a member of the Fermanagh senior football team in 2009. In 1999 he won a Corn na nÓg title in 1999 with St Michael’s College , Ennishkillen and the Ulster inter-College’s MacRory Cup in 2002.

He was a former student at Oxford Brookes University, where he studied law and French he spent a year in Lyon, France, in 2005 on an Erasmus scholarship.

He studied for a Masters in International Relations at DCU, and in 2011 began working with the UN Refugee Agency with an internship in Geneva. His work with its Division of International Protection involved refugees in Syria, Mali and Myanmar.

Working with the UNCHR is nomadic involves a three-year rotation system which means moving to various trouble spots around the world but O’Brien had said that, while his work meant he would not living in Fermanagh in the near future, his plan was to return there.

Mick Rock, chair of the GAA’s National Club Committee, expressing his sorrow on the news said “met him a few times and he left a lasting impression. Condolences to his family and his friends in Fermanagh GAA.

Eóin acNicholl, sports science officer with Ulster GAA, said he “had the pleasure of lining out alongside him on a few memorable days. RIP Shane.” Former teammate Ryan McCluskey said “another life taken too soon. Had the pleasure of playing alongside this young man. A gentleman and brilliant man.”