Leinster MHC quarter-finals: Cormac Egan with a perfect 10 for Offaly against Kildare 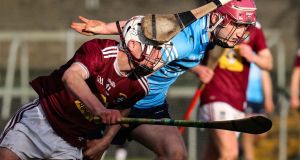 Captain Eamonn Cunneen delivered for Westmeath in sensational fashion with a huge display to help dump 2018 winners Dublin out of the Leinster MHC.

Cunneen’s 0-9 haul and a goal from fellow midfielder Mark Cunningham helped secure a breakthrough 1-12 to 1-9 win over Dublin in Mullingar.

Dublin led 0-4 to 0-3 in the 19th minute when Cunningham forced a turnover and raced clear to strike a crucial goal which ultimately separated the teams.

Brian McGrath wrapped up the scoring for Westmeath with a terrific point in stoppage time – securing a semi-final clash with Offaly next Sunday.

It was particularly impressive as almost half the Westmeath team were on football duty against Meath in Navan on Saturday.

The Faithful were more comfortable 1-18 to 0-9 winners against Kildare with Lochlan Quinn posting a perfect 10 points.

Leo O’Connor’s side actually started slowly in Newbridge and trailed by three points early on but put the contest to bed with an unanswered 1-15 either side of half-time.

Offaly dual player Cormac Egan, a key figure for their footballers also, struck the game’s only goal at the three quarter mark when he charged through and fired to the net.