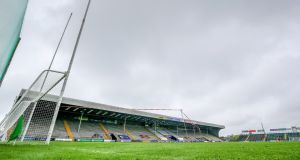 In a game disrupted by strong winds and driving rain, Wicklow went into the lion’s den at Wexford Park and stubbornly fashioned a 0-13 to 0-10 win over Wexford that ensured promotion fron Division 4.

Although there was disappointment for Wexford - who missed out on promotion, with Limerick’s win away to Sligo ensuring they joined Wicklow in moving up to Division Three next year, as well as sealing the title - the chance for revenge will come around swiftly with the two sides facing each other next Sunday in the Leinster Football Championship. “We lost, we have to dust ourselves down and try to be ready for next Sunday,” admitted Wexford manager Shane Roche.

Wicklow’s solid game-plan and workrate saw them control the game, especially when playing into the elements in the second-half. Wicklow led 0-6 to 0-4 at the break, with goalkeeper Mark Jackman contributing two long range frees to his side’s cause.

Experienced centre-fielders Pádraig O’Toole and Dean Healy were key influencers in the second-half, winning possession and driving their side forward and both players scored a point with driving runs through the Wexford defence and moved into a 0-13 to 0-7 lead entering the final phase. Wexford finished strongly with three unanswered points from Ben Brosnan (2) and Nick Doyle but it was insufficient.

Limerick secured the title the hard way with a 1-16 to 1-14 win away to Sligo at Markievicz Park: Hugh Bourke finished a Seán McSweeney pass to the net in the 17th minute to give the visitors a 1-6 to 0-1 lead and they retained a comfortable eight points lead at half-time, 1-9 to 0-4.

Limerick seemed very much in control of the game when leading 1-13 to 0-7 midway through the second-half but were forced to endure a nervous finish as Sligo - with Pat Hughes scoring the goal - made a match of it. Limerick goalkeeper Donal O’Sullivan kicked two pointed frees late on to give them some breathing space and glad to hear the full-time whistle to secure promotion.

Antrim, who had given up home advantage, beat Waterford by 2-14 to 0-13 in Dundalk but ultimately the win wasn’t sufficient to earn promotion. Odhran Eastwood, in the ninth minute, and James McAuley, in the 53rd minute, provided the goals for Antrim who finished the campaign in third position in the table.