Limerick well primed for a hectic tilt at three titles

Five games in seven weeks could bring a clean sweep of league, Munster and All-Ireland crowns 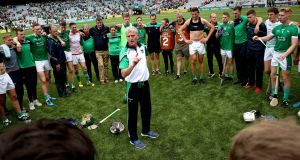 In one way, nowhere was an enforced rupture to the intercounty season less welcome than in Limerick.

By the end of the league, they were like a race leader waiting for the safety car to pull into the pits and leave the road clear ahead of them. At the beginning of March, their record for the spring competition read: played five, won five, lost none. They were not messing around.

They’d beaten Tipp in Semple and Cork in Páirc Uí Chaoimh. Their points difference was +25 and though some other teams had bigger numbers beside their name, Limerick hadn’t needed to pad theirs out with murderous totals over appointed whipping boys. They beat Westmeath by seven –- decisive to be sure but no more so than the eight points they had over Galway.

It wasn’t that they were blowing everyone away. It was more that they were efficient, insistent and ruthless. If you’d asked them when they wanted the championship to start they’d have shrugged and wondered what you were waiting for.

In another way though, a seven-month break in which the world has had other things on its mind was not without its upside. It all seems so long ago now but it’s fair to say that the Limerick hurling squad began the year under a distinct cloud. Nothing crippling, just a bit more noise and static than John Kiely would have liked.

There was the case of Eamon O’Neill, the team’s former logistics manager. O’Neill was a well-known Garda in Limerick who himself became the subject of a Garda investigation in 2019. The case is ongoing and has nothing to do with the Limerick hurlers but in an affidavit to the High Court, O’Neill claimed that Gardaí had been questioning members of the team about the alleged quashing of speeding summonses and other similar offences. There was no fall-out for Kiely’s players but it was something they could have done without.

And then, famously, a November trip to New York for the Super 11s Classic ended with two panel members being sent home, one for having a streetfight, the other for taking a video of it that subsequently pinballed around social media. This was back when we used to think of going viral as a digital nuisance rather than a serious real world thing.

Again, it was an irritant rather than a serious problem. But there was a clear sense through the league of the players knuckling down, of school principal Kiely brooking no messing. Since their league form had been unimpeachable, there was no room to suggest a fall-out from New York. But it was still fresh enough in the memory that a stumble in a league semi-final or the first round of Munster might have led to it getting another run-out.

The break has washed it all out to sea. Of all the ways in which the 2020 Championship is unique, maybe the most interesting is the fact that it has no memory. Though tomorrow doubles as a league final, it is completely divorced from the round robin stages that fed into it. And if league form from February isn’t relevant, then a night out gone wrong in Manhattan last November counts for even less.

As for making up for the disappointment of 2019, it’s 15 months since Limerick’s last championship game. Losing to Kilkenny last July may as well have happened in black and white. This championship is a once-off, a seven-week dash for the line. Mastering the here-and-now of it all will matter more than ever before.

“The hardest thing for every panel is going to be mindset,” says former Limerick captain James Ryan. “I saw it in the club championship – the teams that see this as a chance, who are tuned in from the start, they’re going to stand out from the teams who aren’t. The hardest job for any management going in here is to convince the players that they actually have a championship game at the weekend. They all know that, obviously. But it will still come as a shock to some of them out on the pitch.

“Even watching the football there last weekend, you could see that some players weren’t 100 per cent ready or hadn’t expected everything to come at them from the start. They were making mistakes they wouldn’t normally make. And that’s understandable – with all the talk of Level 5 and whatever else, players might not even have been sure that there was going to be a game midway through the week. So things like that will definitely affect your mindset. The managers who get that right will be the ones whose teams go the furthest.”

For Limerick, the All-Ireland is five games in seven weeks. Beat Clare tomorrow and Tipperary lie in wait the following weekend. Lose and there’s a qualifier in a fortnight. One way or the other, there’s no easing in here. You go at the B of the Bang or you don’t go at all.

In that respect, they appear better set than most teams. Darragh O’Donovan lost out on his club campaign with a knee injury at exactly the wrong time but his recovery looks to have been timed to the minute. Mike Casey is a massive loss at full-back and if Richie English is to be involved, it will most likely be at the back end of the championship. Having to replace two-thirds of your full-back line isn’t ideal but in a world of uncertainty across all panels, Limerick’s predicament is far from the worst.

“They’re very settled apart from those two losses in Richie and Mike,” says Ryan. “I’d say you’re looking at Barry Nash coming in at one corner and Aaron Costello in the other. Maybe Tom Morrissey might come back to full-back – he did it a bit in the league where he marked Seamie Callanan. But otherwise, it’s not too bad.

“The Limerick squad has a lot of forwards, a lot of depth. And what it has nearly above all else is it has a really good age profile. I know myself, if you’re playing week-to-week, which is what this championship is going to be, you need guys who are mostly in their mid-20s. They recover quicker, they have an edge in terms of suppleness and flexibility, they don’t take five or six days to get themselves right after a championship game.

“No matter who you are, when you start getting close to 30, that’s how long it takes to recover. So that to me is going to be Limerick’s major advantage – they have a whole load of guys who are between 23 and 27. They have quite a few guys who are just finished college so they’re not mixing in those circles and that means the chances of a stray Covid case are lower than if they were all a couple of years younger.”

The way the cards have fallen, it looks like the draw has gone Limerick’s way. Starting a Munster championship against Clare wouldn’t usually be anyone’s idea of a handy number but the loss of John Conlon, Colm Galvin, Podge Collins and Peter Duggan has severely weakened Brian Lohan’s hand.

Assuming Limerick come through it unscathed, it ought to be a priceless game under the belt ahead of Tipperary the following week. It will be Tipp’s first game in eight months. They won’t have a lot of time to get their legs under them.

“Go back to when Kilkenny were winning All-Irelands. Their biggest thing was consistency. And I think if you look at Limerick going back to the start of 2018, they’ve been unbelievably consistent. We’re a team that needs consistency to keep moving forward. And I think the nature of this championship is that whoever gets momentum behind them, they will be tough to stop. With games coming so rapidly, I think it suits Limerick.”

Doubling up the Munster opener as the league final is the sort of quirk only a pandemic would allow, of course. For what it’s worth, Limerick have lost a grand total of two league games since 2017, one of them after extra-time. It’s 35 years since Limerick completed a back-to-back of league titles, 38 since they did two-in-a-row in Munster. It wouldn’t be a massive surprise if they squared both circles in the coming weeks.

Their eye is on one prize above all, though. Though it’s not the All-Ireland anyone had in mind at the start of the year, it’s the only one on offer. If Limerick win it, they won’t be sending it back.