Armagh promoted after Clare win, Kildare miss out despite victory over Westmeath 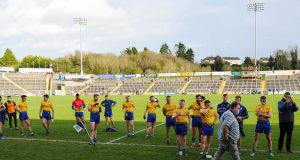 The interaction of the opposing teams afterwards was interesting, the mixed emotions - Roscommon taking the return elevator back to Division One as champions, Cavan taking the trapdoor down to Division Three - confined to gentle fist bumps out on the Breffni Park field.

Having secured the Division Two title with a 1-12 to 0-13 win, Roscommon’s unsettled week, which saw 13 players made unavailable due to Covid-19 related issues in the squad, ended with a semblance of normality as they maintained their dominance over Cavan: in 11 meetings going back to 2012, the Rossies have suffered defeat just twice.

Donie Smith’s display, kicking seven points, four of them from frees, earned him the man-of-the-match award. But the corner-forward was keen to emphasis the team spirit that was demonstrated: “We’d a tough enough week with everything that went on off the pitch, but we saw it as giving a lot of chances to different fellas (for the championship).”

Roscommon’s defence of the provincial title starts with a semi-final against Mayo or Leitrim on November 8th.

Certainly, the depth of the Roscommon squad was demonstrated - with eight changes from the team that beat Armagh the previous week - and they led from start to finish against a Cavan side who were guilty of some poor shot-making, with no fewer than 16 wides by the time referee Seán Hurson sounded the final whistle.

Roscommon led 0-7 to 0-4 at half-time and, when centrefielder Enda Smith got on the end of a good move to palm the ball to the net midway through the second-half, it was sufficient for the Rossies to keep Cavan at arm’s length. And, with results elsewhere going against them, Cavan joined Fermanagh as the two relegated teams.

“It was all in our own hands, so we have to take it on the chin. When you don’t take your chances, you deserve to be punished,” admitted Cavan manager Mickey Graham.

Armagh also secured promotion to the top flight for 2021 with a storming finish - kicking the last five points of the game - for a 1-18 to 1-13 win over Clare at Cusack Park in Ennis. Oisin O’Neill (two), Rory Grugan, Jarlath ÓG Burns and Rian O’Neill provided the points late on to ensure Armagh’s return to Division One after a nine-year absence.

From the start, Armagh’s intent was obvious and it took only two minutes for Calum McComiskey to get onto a quickly taken free from Grugan and fire to the net for their goal. Armagh led 1-7 to 0-9 at the break but were caught by a Cian O’Dea goal for Clare in the 48th minute which reduced the margin to a single point only for Armagh to take destiny into their own hands with a barnstorming finish.

Despite the defeat, Clare avoided relegation based on their head-to-head with Cavan earlier in the campaign, which saw Cavan make the drop to Division Three.

Laois were also in a relegation dogfight but showed great character in their 3-12 to 1-11 win over Fermanagh in Brewster Park.

Fermanagh had seemingly taken the initiative in establishing a 1-10 to 0-7 lead after a Tomas Corrigan goal but Laois - who had Kieran Lillis sent off - put in a tremendous fightback with goals from Gary Walsh (two, the first a penalty) and another from Paul Kingston ensuring their survival in Division Two for another year.

Kildare had a mathematical chance of earning promotion depending on results elsewhere. Jack O’Connor’s side did what they had to do, with a 0-16 to 0-11 win over Westmeath in Newbridge, but in the end the win was only sufficient for them to leapfrog Westmeath into third place in the table.