County-by-county: Time for Monaghan to make the next step

Ulster: Mickey Harte has built another Tyrone side nobody wants to come up against 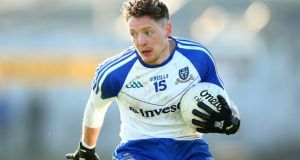 Next up: v Donegal, Ballybofey, May 21st

It’s 2009 since they beat an Ulster team other than Fermanagh. The recent row between the players and the county board wouldn’t scream confidence, although it does hint at a workable level of solidarity. Stephen Beatty has been a major addition around the middle and CJ McGourty has kept the show rolling up front. But they’ll need a kind qualifier draw to see any joy.

Next up: v Down, Páirc Esler, June 4th

Should have been promoted from Division Two. Rank carelessness meant they somehow only took a point from games against Sligo and Laois when they were the better side both days. Jamie Clarke is back and Kevin Dyas is apparently close too, after three years out injured. Ulster is probably beyond them but a win against a more fancied side somewhere along the way would be no shock.

Hard to pinpoint any particular improvement since Terry Hyland’s departure. Lowest scorers in the league across the four divisions. Dara McVeety’s pace will cause problems and a fit Gearóid McKiernan is always a plus. But although they concede very few goals – the fewest in the league, in fact – what middling team would you reasonably give them a shot of beating?

Next up: v Tyrone, Celtic Park, May 28th

Unlucky to be relegated by the last kick of Division Two. An extended period with the Slaughtneil players in situ should bring them on somewhat but they look a good distance off what Tyrone will bring, especially without suspended James Kielt. Can point to qualifier wins over Meath, Louth, Cavan and Wexford in recent years as evidence that they have nothing to fear from a back-door run.

Next up: v Antrim, Ballybofey, May 21st

Those All-Ireland odds may look a little optimistic but Rory Gallagher can be happier than most with early 2017. This will be Michael Murphy’s team for as long as he’s around but the likes of Ciarán Thompson, Cian Mulligan and Eoghan Bán Gallagher are putting their names on it too. Likely to meet Tyrone on June 18th in Clones; should make last eight whatever happens.

Snapped a near two-year winless streak and didn’t get relegated, ergo the league was a success. Now for championship, where they’ve only beaten Leitrim since 2013. Caolán Mooney is leading from the half-back line after last year’s walkout and if they can get Mark Poland, Jerome Johnstone and Barry O’Hagan in the forward line together, they can be a threat. Armagh will be sticky, though.

Next up: v Monaghan, Clones, May 20th

Have gone into freefall after a couple of strong seasons. Another Ulster team who had a rotten league, relegated from Division Two with only a single goal to their name, scored away back on February 4th. Could have done without being in the Ulster preliminary round, especially with a mounting injury list that raises doubts over Tomás Corrigan, Ryan Jones and Declan McCusker.

Next up: v Fermanagh, Clones, May 20th

Time to take the next step. The addition of Jack McCarron has finally given Conor McManus some breathing space and, just as importantly, removed that responsibility from Kieran Hughes. The loss of his brother Darren for most of the Ulster campaign is a major blow but if he’s back for August, they can make an All-Ireland semi-final.

Mickey Harte has built another team that absolutely nobody wants to play. Fast, athletic, well structured in defence, they will make short work of most teams they face. The problem comes when they need reliable forwards to finish the job against top-six counties. In Seán Cavanagh’s last season, they badly need an inside-forward or two to help him out.