Connacht: Groundhog day as Rochford’s side ready themselves for another crack at Sam 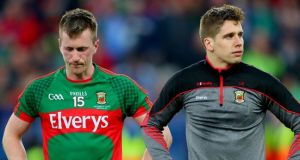 Cillian O’Connor and Lee Keegan are getting ready to do it all again. Photograph: James Crombie/Inpho

Like getting a line on a fruit machine, Galway dethroned Mayo in the province, won Division Two and promotion, and produced another good under-21 crop. Sense of mission has seen old-timers like Seán Armstrong and Michael Meehan return to the panel. Rising hopes for the 21s depressed by sundry departures for the US this summer. Litmus test likely against Mayo.

There’s a certain amount of optimism in the county given the quality of the younger players coming into the panel. Came close to spiking Wexford’s promotion run early in the league but ended resolutely mid-table. Will be targeting a semi-final against Roscommon while reminding themselves they lost to London four years ago.

Next up: v Leitrim, Ruislip, May 28th

Had to play all league fixtures away last year because of development work in Ruislip and they lost the key contest against first-round opponents Leitrim but were missing players. There has been a notable emergence of home-grown footballers. Ciarán Deeley, in his second year as manager, selected four for last year’s championship and one of them, Liam Gavaghan, is this season’s captain.

Another mixed league begs the question has last year’s hair’s breadth All-Ireland disappointment stifled the impulse for radical reform? In one sense it’s hard to tear up the blueprint when so close but so many players are in their seventh year of questing for Sam. Fergal Boland has attracted good reviews but he’s the only new addition from last year’s All-Ireland-winning under-21s.

Since an encouraging 2016 league the last year has been a nightmare. The collapse in the Connacht final was followed by a management schism and a hopelessly outgunned league campaign. There are positives, however faint. The draw has been kind and although relegated, the team battled along the way. Strength is in attack but issues at centrefield and defence remain.

Next up: v Mayo, Elvery’s MacHale Park, May 21st

First winners of the season thanks to an admirably focused display in New York despite serious talk of a first home win in that fixture. Absence of key forward Niall Murphy was a blow with no definite timetable for his return. Another humdrum league with a mid-table finish in Division Three behind them, Mayo – and the qualifiers – now beckon.