County-by-county: Can anybody lay a glove on Dublin?

Leinster: Kildare and Meath will both fancy a crack at Jim Gavin’s All-Ireland champions 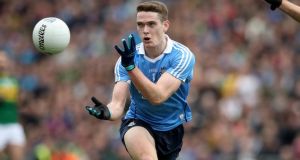 Dublin are yet to settle on a midfield partner for Brian Fenton. Photograph: Ryan Byrne/Inpho

Next up: v Wexford, Netwatch Cullen Park, May 21st

Strange league for Carlow, which in the space of a week ranged from putting the only dent in Westmeath’s march back to Division Three by drawing in Mullingar to losing at home to London. But it was an improved season, finishing third and even beating championship opponents Wexford – albeit they were under strength having sealed promotion.

Momentous season ahead with potential three in a row. A fitful league campaign nonetheless extended the unbeaten run into a record until eventually caught by Kerry in the final. Defence was meanest in the four divisions and Stephen Cluxton’s shot stopping was excellent but the attack needs rebooting and there hasn’t been a regular starting partner for Brian Fenton at centrefield.

Cian O’Neill has steered them back to Division One in successive seasons. Disappointment of Division Two final defeat by Galway was offset by the return of Paddy Brophy from Australia. Team has structure and balance with youthful talent, such as Neil Flynn and Ben McCormack up front and with plenty of athleticism in the middle third they’ll target the provincial final.

Next up: v Longford, O’Moore Park, Portlaoise, May 21st

From Division Two to Four in two years. Arguably unlucky, as one more score in the final match would have kept them up. Well-known players like John O’Loughlin, Evan O’Carroll and Donie Kingston in the front eight but conceded an average of nearly 0-18 per match and discipline has been poor with red cards costing league points against Sligo and Antrim.

Next up: v Laois, O’Moore Park, Portlaoise, May 21st

An air of frustration predominates, as the county hasn’t got a bad panel with players like Michael Quinn and veteran Brian Kavanagh. Not helped by injuries and only trod water in the league. A respectable qualifier team in the past couple of years, winning matches as underdogs. The opening fixture against Laois will be crucial, with opponents at a low ebb.

Next up: v Wicklow, Parnell Park, May 21st

Colin Kelly has done well to turn things around for Louth and bring them back to Division Two after a campaign in which they had the division’s best defence. Bad news followed with the revelation that Derek Maguire, hugely influential at sweeper in the past two seasons and Louth’s current footballer of the year, will spend summer in the US.

The force of Andy McEntee’s will being brought to bear on the team has to be tempered by reasonable expectations. Promotion narrowly missed because of a bewilderingly inconsistent campaign. Some good players in Donal Keogan and Cillian O’Sullivan, and a bright attack. They’ll have high hopes of a Leinster final and a shot at the Dubs.

A bruising league that featured flirtation with relegation and a 30-point hammering from Armagh, contributing to the worst defensive record in the four divisions. Last-day survival in Division Three was at the expense of neighbours Laois and veteran maestro Niall McNamee looks likely to be available for visit of Westmeath.

Tom Cribbin must be pleased with how the team has responded to last year’s relegation to the basement. A powerful campaign bulldozed through the league and duly won the divisional title. John Heslin has been in terrific form but the team is on course for another date with Dublin and so any championship progress will be in the qualifiers.

Next up: v Carlow, Netwatch Cullen Park, May 21st

Downbeat end to a business-like league. Having secured promotion, Séamus McEnaney decided to rest players and the results saw Wexford in the unusual position of going up with a minus-18 scoring difference. One of the defeats was by championship opponents Carlow. They need more poke up front – even allowing for weakened selections, they just about outscored bottom teams Wicklow and London.

Next up: v Louth, Parnell Park, May 21st

A poor league ended in just one win for the second time in three seasons. Johnny Magee has had to re-fit extensively in the light of various retirements and departures so it’s a much changed panel with an average age in the early 20s. Bucking the trend has been experienced forward Seánie Furlong but team lacks depth.