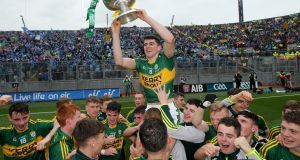 Mark O’Connor will make his AFL debut on Saturday, just a matter of months after playing his first official game of Aussie Rules.

The former Kerry prodigy has been upgraded from the rookie to the senior list after midfielder Brandan Parfitt suffered a long term injury and will be joined in the Geelong squad by fellow Irish man Zach Tuohy, who has been a revelation since joining from Carlton in the off-season.

O’Connor was a star of Kerry’s All-Ireland minor winning teams of 2014 and 2015, putting in a man-of-the-match performance when captain two years ago.

A dual Hogan Cup winner with Pobalscoil Chorca Dhuibhne also, the Dingle man had graduated to the senior panel when opting to try his hand Down Under with Geelong.

The 20-year-old’s progress has been stunning since the Cats beat off interest from five other clubs to recruit him last October, and he impressed once more in just his fourth appearance for the reserves at the weekend, accumulating 18 possessions in their VFL defeat and displaying line-breaking speed down the flanks.

The lack of pace has been perceived as a weakness for the seniors, who have seen a run of five consecutive wins halted by two losses in a row but will be expected to get the better of Essendon at the MCG in Melbourne.

Fellow Kerryman Tadhg Kennelly, who works in talent identification for the AFL and is the only Irish player to have won an AFL premiership, first took note of O’Connor when hearing he had played minor for Kerry at 15.

“When you see that, straightaway you say ‘Hang on a second – he must be something special’, ” said Kennelly.

It was his compatriot’s maturity, in-game understanding and leadership that struck him most when they started working together.

“He’s able to identify what’s needed right there and then. It’s hard to quantify it in terms of numbers, but he can run – he’s got really good endurance – and he’s got very good marking ability.

“But you can’t quantify that true leadership. He’s got a couple of good leaders at his football club like Joel Selwood. But he’s not too dissimilar to someone like Luke Hodge at centre-half back or in the forward line, to say ‘Well this is what’s needed, I can go and do it.’

“He’s got a long way to go, but he’s making blokes like us look very poor. We struggled to get a game and now it’s Round 8 and he’s straight in. It’s an incredible achievement and an incredible story.”

“He’s one of those players with fantastic composure and decision-making under pressure. Everything around him looks like it’s going in slow motion. He’s very calm and that’s what separated him in the under-18s (minor) in Ireland – every time there was a big moment, he was the one that took over the game.

“That sort of stuff is very hard to identify from a recruiting perspective, but when you’re actually watching him play live you can clearly see it. He’s got a great temperament to be a professional footballer.

“He’s a relaxed boy and a real thinker. He won’t blab his mouth off, he’ll sit down and listen to a conversation and really think about it.

“You’d think he’s quiet, but he’s just taking things in, which is really good for a young player because there’s a lot to take in at his age.”