Grey areas for Maurice Deegan – the GAA man in black 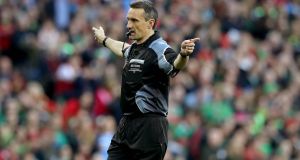 Maurice Deegan: “The black card has been a massive, massive change. It has cleaned up the game an awful lot, definitely.” Photograph: Inpho

Dog years have nothing on referee years. Maurice Deegan’s first championship game was Limerick v Tipperary on May 17th, 2004, and for a sense of how long ago that is, there follows a list of things he didn’t have to worry about that day. (Deep breath). Marks, black cards, playing advantage, six subs per team, 30 seconds of added time for each sub, kick-outs from the 20-metre line, penalties from the 11-metre line, sideline balls from outside the boundary line.

Since then, too, what constitutes a legal handpass has changed twice, a legal tackle once. Players have got faster, hits have got heavier, short kick-outs have kept the ball in play for longer. Put it all together, though, and it still doesn’t measure up to what Deegan sees as the biggest change.

“Oh, the scrutiny, definitely,” he says. “The pressure on refereeing now, with the level of analysis and scrutiny involved, is so much more than when I started. And I think that’s wrong, to be honest. The attention should be on the game, not the referee. The amount of scrutiny by TV panels, papers, every source of media, is just huge. And it’s always getting bigger.

“If I was walking down the street in Cork or Kerry or Mayo, I’d say 10 or 15 people would recognise me. People get to know you, they see you on the telly every other week. I would be fairly thick-skinned so I generally don’t mind it but other referees mightn’t like it.

“Obviously if you’re taking up refereeing, you’d want to be fairly thick-skinned. But there’s nothing you can do about it. You’d like to go on holiday to get away from it sometimes but if I went on holiday in Kerry or Galway or Cork, you’d never get away from it.

“I’m not on social media. I would know a lot of stuff goes up on Facebook and Instagram but I never see it. That’s a conscious decision on my behalf. I don’t want to be on it. I don’t want to see it. But obviously the people I feel sorry for when it comes to social media, I have a young girl who is only 13 and I have a lad who is 18. They see it quicker than anyone else. The effect on them rather than the effect on me is what would mean more to me. But obviously that’s the world we live in.”

The referee for three All-Ireland finals, including last year’s replay, Deegan heads into his 14th championship as enthusiastic as ever. By necessity, he is fitter than he was 10 years ago. He has no problem with rule changes and has no complaints about his workload. He doesn’t see a need for an extra referee on the pitch, for instance.

“I don’t, no. The game is evolving all the time so the rules have to evolve with them. The biggest part is getting consistency and we are working on that all the time. We have seminars every month, we work together all the time to try and get it more consistent. That’s the most important thing.

“The big thing we are working on in Croke Park at the minute is the mental side of it. Obviously, you can get yourself fit. And obviously, you can make yourself an expert on the rules. But a part I’ve always been interested in is the mental side of it. Just say, in a game, if you make a call, you can sometimes find yourself five minutes later still thinking, ‘Jesus, did I make the right call on that one?’ You have to learn to push that aside and just get on with it.

“And then of course there’s post-game. Have you someone to talk to about how it went? Are you able to process it and move on? Croke Park have brought in someone to address that with us. That’s what they’re looking into at the minute, trying to help referees with the mental side of it. Without something like that, referees will burn out. I can’t see referees continuing to have careers that go on any longer than eight or nine years to be honest.”

The sun will rise, the sun will set and still the birds will chirp a dawn chorus of yap about the black card. He doesn’t know what his first game of Championship 2017 will be yet but he can be fairly sure that somewhere along the way, he’ll get nailed for a black card given (or not). Ho-hum.

“The black card has been a massive, massive change. It has cleaned up the game an awful lot, definitely. Personally, I think it has been very good for the game. I think it is settling in. The body-check is gone out of the game and that was badly needed. But the one element of it that is so hard to get right is the pull-down. Because it’s so vague compared to the others, it’s so difficult to get consistently right.

On that, and everything else.