Jason Forde appeal to be heard early next week 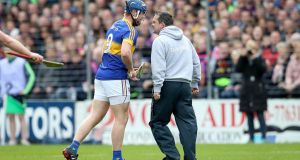 Jason Forde’s appeal against the one-match ban that currently rules him out of the Munster SHC quarter-final against Cork will be heard early next week.

And county board secretary Tim Floyd has vowed to take the application of rules at Central Hearings Committee level “to task”.

Tipp are unhappy with the suspension handed down to Silvermines clubman Forde, following his clash with Wexford manager Davy Fitzgerald during the Allianz League semi-final.

Forde was originally hit with a proposed two-match ban, later halved at the Central Hearings Committee, but at present he’s not eligible to line out against Cork at Semple Stadium on Sunday week.

The “assault” infraction was not proven but Forde was banned for one game for the lesser charge of “contributing to a melee”.

Tipp feel they have a strong case, however, and are currently preparing the necessary paperwork for Croke Park.

It’s expected that Forde will visit the Central Appeals Committee (CAC) on Monday or Tuesday.

Floyd told Tipp FM: “They specifically ask if there’s any particular date that you want it held.

“We’ve said early next week, naturally enough with the game later in the week. “We want to keep it (appeal) as far away from it (game) as we can.”

And Floyd confirmed that Tipp are not prepared to take the charge levelled against Forde lying down.

He added: “That’s the whole reason why we lodged it.

“We feel very strong on some of the application of the rules by the (Central) Hearings Committee, and we’re taking those to task.”