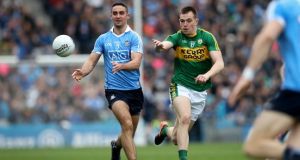 Jack Barry is among the Kerry young guns who inspired the Kingdom to league final victory. Photograph: Ryan Byrne/Inpho

Next up: v Limerick, Cusack Park, May 27th

Quietly underrated, given they stayed in Division Two despite not always having the services of Gary Brennan at their disposal. The only team in the country to score a goal in every league game too, which is a fair boast. Bound to run into a Kerry brick wall but could well creep through the qualifiers again. Last-12 possibilities.

Next up: v Waterford, Dungarvan, May 27th

You have to go back to 2013 for the last time they beat anyone from the top two divisions in the championship. Clare, Longford, Limerick, Tipperary and Sligo – these are the teams Cork win against now. Too many draws meant they didn’t threaten promotion back to Division One and they must be considered highly vulnerable against Tipperary on June 10th.

Eamonn Fitzmaurice has warded off some of the shriller Kingdom voices by winning the league and turning over his playing staff in the process. Tadhg Morley has grown into a tigerish presence at centre-back and the introduction of Jack Barry has allowed David Moran to take charge around the middle. Not as much money in the bank up front as in other years, which could leave them short come September.

Going nowhere. Huge turnover of players means half of the panel of 20 who played against Clare in last year’s championship are gone for this year’s fixture. Three first-teamers left after the league, although Ian Ryan’s return is a much needed boost. A short summer awaits.

Must have Cork squarely in their sights and ultimately a Munster title on their minds. This is the year to go for it – Cork won’t be down forever. A return for Peter Acheson looks not to be on the cards but Liam Casey has stepped in to good effect and with Conor Sweeney and Michael Quinlivan in harness, they have a chance. Quarter-finals a must.

You’d have to feel for them more than ever these days when the hurlers are idols to every kid in the county and the footballers of Clare and Tipp have disappeared over the horizon. A promising start to the league fizzled out with five defeats in a row. Hard to imagine anything other than a quick two-and-out.