Could we see the end of the road for a manager in the Kildare v Tyrone clash? 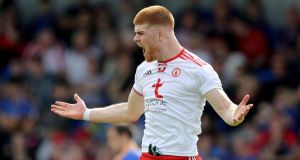 Tyrone’s Cathal McShane. Tyrone went back to brass tacks against Longford, dropping a phalanx back deep and leaving McShane up on his own. Photograph: Bryan Keane/Inpho

All games on Saturday

Could we see the end of the road for the losing manager here? Mickey Harte never gives an inch when it comes to these matters, but a round-three qualifier defeat would definitely bring questions in Tyrone. And the only way Kildare will have kicked on from last year is if they win here – otherwise, you’d imagine, Cian O’Neill’s seat will start feeling fairly hot under him.

The home side have started to gain some sort of form after some horribly glitchy displays in the early rounds of Leinster. Ben McCormack and Adam Tyrrell have been bright spots in attack, and Fergal Conway is keeping Tommy Moolick on the bench, albeit it would probably be better if they could both find a way in.

Tyrone went back to brass tacks against Longford, dropping a phalanx back deep and leaving Cathal McShane up on his own. Kildare would not necessarily mind a repeat of that here – they have improved steadily against defensive teams throughout O’Neill’s time in charge. It also implies a level of uncertainty in the Tyrone camp that they can take advantage of.

Newbridge isn’t the death-or-glory factor it was against Mayo last year but it should still be an advantage. Tyrone are probably the better side but they’re not unimpeachable, and Kildare have more than a puncher’s chance here.

We’re six years into the Colm Collins era and still Clare struggle to get their due respect. They finished a point behind Armagh and ahead of Cork on a head-to-head basis in Division Two of the league this year. If either of those two teams were heading to Mullingar would they be doing so as underdogs? Only on the screens of careless bookmakers, surely.

Yet Clare are still viewed as such. Improving their fortunes in the qualifiers is the only way to change that. For all their doughty qualities in the league they threw away a late lead against Armagh last year, and often struggle to wash a Kerry defeat out of their hair.

Yet Westmeath have been limp enough so far this summer, and Clare have passed sterner tests than this under Collins.

James Horan has changed it up here – along with the enforced absence of Diarmuid O’Connor he has dropped Darragh Coen, Colm Boyle and Jason Doherty to the bench. It means a first start for Mikey Murray, a Ballina wing-forward/midfielder who has never played a league or FBD match for Mayo. Donie Vaughan is in, maybe with Jarly Óg Burns in mind. One way or the other, Horan is obviously looking to finish the game with strength coming in off the bench.

We should have a cracker in store. Armagh seem incapable of playing a boring game, and Kieran McGeeney deserves huge praise for sticking to his guns these past few years and insisting that expansive football was what would get the best out of his players. They are seeing the fruits of it, and a win here would be the ultimate vindication.

Armagh are coming and this would be a trampoline on to another level for them. But Mayo will likely have a shade too much experience for them.

Two Leinster teams who have the graph going in the right direction. Regardless of what happens here, John Maughan’s first season with Offaly has been a success. They are up off the canvas and have something to build on. A win over the neighbours would put the tin lid on it.

Laois can’t really allow that to happen. They’re a level above Offaly just now, and that was a serious win they pulled off in Derry last weekend. John Sugrue has plenty of experience to come in off the bench if needed, but if the team he has picked does a professional job it should be well in hand before the end.