Echoes of the past as youthful Armagh head for western front 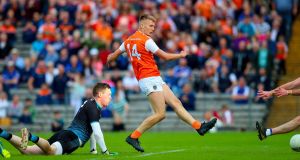 Rian O’Neill scores a goal for Armagh in the victory over Monaghan at Clones. Photograph: Tommy Dickson/Inpho

Echoes of the past in Castlebar this Saturday. The later rounds of the All-Ireland football qualifiers are no longer simply about staying afloat but catching a wave.

Mayo, who have experience of making an entry through either the front or back door, are reeling a little from a championship that, having promised great things when the league was won, is now playing out to the accompaniment of an injury crisis.

Mayo have known some scary moments in qualifiers at MacHale Park in recent times, against Fermanagh and Derry for instance, and the profile of this weekend’s challengers is of concern. Another Ulster county Armagh have introduced some talented young players and made it to round three full of confidence.

The news from Mayo this week that captain Diarmuid O’Connor would miss the rest of the season was the latest blow, coming just after their highly regarded new centrefielder Matthew Ruane was also ruled out of further involvement this summer.

Former Armagh joint-manager and BBC pundit Brian Canavan is impressed how his county has pulled together and evolved since the lively first-round win against Down after extra-time.

“The young players have a lot to do with it,” he says. “Rian O’Neill and Jarly Óg Burns are strong young fellas and good footballers. They’ve changed the style of play. After the despair people felt last year about losing to Fermanagh, things have been on an upward curve.

“They really put it up to Down and the semi-final against Cavan could have gone either way. I felt Monaghan were there for the taking in the qualifiers and I think Mayo could be as well. Down people I spoke to were surprised that they got as close to them as they did last week.

“It may be orange-tinted glasses but I don’t think Armagh would be out of place in Division One if they can keep everyone together and push on for promotion next year. Reaching the Super 8s would really help that process”

Already they have closed the book on Monaghan, last year’s All-Ireland semi-finalists, in their home ground, Clones. Mayo represent a step up but the county’s apparent bright new dawn after beating Kerry at Croke Park for a first league title in 18 years has clouded in the meantime.

Canavan remembers another date the county had with a highly-rated but struggling Connacht side. It was back in 2001, the same year that Mayo previously won the league and, coincidentally, the last time Roscommon beat both them and Galway in the same championship to win Connacht.

Armagh and Galway were drawn at this same point in the All-Ireland qualifier series then in its very first year’s trial. The opportunity to play again after being eliminated from the provincial championship didn’t inspire everyone but this particular contest became a familiar phenomenon in the qualifiers – a make or break match the winners of which would get serious momentum.

“We were put out by Tyrone in the first round,” he says, “and it was the end of two great years when we’d won Ulster and only been beaten by the eventual All-Ireland champions. The year before, we had taken Kerry to extra-time and a replay before losing.

“The qualifiers were in their first year and we didn’t know very much about them except that we were back on track and back on the road. By coincidence we drew two other Ulster teams. I remember beating Down in Casement Park and like this year Monaghan in Clones before we got to Croke Park.”

It was a famous double bill and the same Saturday afternoon, 18 years ago next week, Sligo beat Kildare but Canavan remembers the additional stress caused by the rebuilding of Croke Park where the Hogan Stand was under construction.

“The ground was being renovated so we had to do our warm-up in Na Fianna’s ground and the traffic from there to Croke Park was heavy and delayed us. I’m not saying that was an excuse!

“When we got there I distinctly remember how small the dressing-room was. There wasn’t room to swing a cat. Anyway we started very badly and fell behind. We made a few changes and got right back, level.”

That’s actually a fairly prosaic description of how the team came out fighting for the final quarter, trailing by seven, 0-5 to 0-12. Then in injury-time the turning point duly arrived.

With the momentum entirely behind them, Armagh launched a last, fateful attack.

“I’ll not name him,” says Canavan, “but the guy with the ball had been told never to kick it.”

“Yes, poor Justin McNulty’s pass was signposted . . . but he most likely would have escaped with it had any player other than Donnellan the younger been in the vicinity.”

Michael Donnellan’s intercept and penetrating solo run set up Paul Clancy to kick the winning point within seconds of Armagh believing that they were on the verge of doing the same. It was a classic watershed. Canavan and his joint-manager Brian McAlinden stepped down and Galway went on to win a second All-Ireland under John O’Mahony.

A year later, Joe Kernan, who by then had taken Crossmaglen to three All-Ireland club titles, emulated those feats with the county.

Now, 17 years after that landmark, Armagh, with Kernan’s captain Kieran McGeeney in charge, head west looking for the big bounce that could land them in the big time.