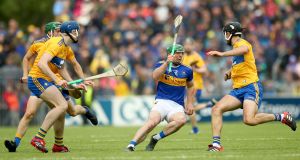 Tipperary’s John ‘Bubbles’ O’Dwyer in action against Clare during the Munster SHC at Cusack Park in Ennis. Photograph: James Crombie/Inpho

There are a couple of points worth making about this weekend before looking at the matches. Huge crowds are expected in both Croke Park and Limerick but I can’t figure out why one of these matches isn’t on the Saturday. There are plenty of people who would like to go to both but as things stand, they’ll hardly be even able to see both.

The provincial councils could alternate Saturday and Sunday matches from year to year to meet the demands of the fixtures’ calendar. It now happens with the All-Ireland semi-finals and last year in its first season, the arrangement worked very well.

Saturdays are common in other sports. People are used to going to rugby matches for instance and with both sets of finalists not far away, travelling isn’t as big an issue.

There is a weight of tradition attached to these matches, which means that none of the teams will be holding back despite no-one getting eliminated and the real business of the championship not starting for another fortnight.

I’d question how much of an influence tradition has at this stage on actual performance. With the advent of bigger championship programmes, league and Fitzgibbon Cup – look at Seán Finn and John McGrath, who have been marking each other every week while at UL – these players have been competing against one another all the time. The old barriers aren’t as steep as they once were.

Another factor in Munster is the appalling All-Ireland record of the champions. Of the last 12, only Tipp in 2016 have won the MacCarthy Cup and nine have been beaten in the semi-finals, in other words have lost their next match.

There has been a great contrast between the provinces so far. Munster has been free flowing and high scoring whereas Leinster has been more physical and intense. Although the Munster teams have shown a higher scoring quality I’m not convinced that the Leinster counties will be far behind when the All-Ireland swings into action.

In the Munster final Tipperary are bringing a pretty impressive level of form. They hit the ground running against Cork, from the moment Séamus Callanan scored the opening goal and maintained that quality of performance apart from two brief periods, one against Waterford and the other against Limerick – both just after half-time.

Their improvement compared to last year can be seen in physique and touch. For example how Bubbles O’Dwyer caught that ball late on in Thurles against Limerick, down below his knee. They have been very powerful and aggressive in defence, which has had the downside of creating problems with frees conceded.

Injuries have become a challenge for Liam Sheedy. Cathal Barrett has been the best of the full-back line and has brought a lot to the defence, picking up Aaron Gillane in Thurles. Although he’s not a long-term absentee, he’s going to be missed this weekend.

The big loss is Bonner Maher, Tipperary’s most influential player this summer, who is gone for the year. Niall O’Meara or Dan McCormack will do a job in the hustle and bustle in his absence and are well up to the standards set up until this year but the Bonner of 2019 isn’t going to be emulated by anyone.

This all places pressure on the team’s panel depth, which has yet to be proven, but those tests were always going to come given that it’s going to be a minimum of seven matches to win the All-Ireland.

There is a crucial difference between this weekend and the earlier meeting in Thurles. Two weeks ago, all of the pressure was on Tipp. They were the ones with the full team and realistically, had to win against an under-strength Limerick.

Now it’s the All-Ireland champions, who have to front up – they’re at home, won’t be missing four of their best players, Declan Hannon, Cian Lynch, Gearóid Hegarty and Graeme Mulcahy, and as a team have yet to win Munster. The vibe is a lot different this week.

It’s easy to come to the conclusion that whoever loses won’t be holed below the waterline but defeat will be a drag on Tipperary’s momentum and in Limerick’s case I’d be surprised if a team that has lost three times by the quarter-finals still has the fuel to make it all the way.

For me, if Limerick find their 2018 form they are favourites but there have been two serious lulls in their performances so far and since the league quarter-finals they’ve lost to the two best teams they’ve played. It’s also difficult to flick on form like a switch.

Tipperary’s form has been consistent and impressive. I think they’ll win.

Croke Park should see a really good game as well. When the counties played in the last round in Leinster, it was ultimately Kilkenny who got out by sneaking a goal and scoring that bit more freely.

Richie Leahy and James Maher hit some terrible late wides and the team missed as much as Wexford in the final stages.

This time the pendulum might have swung a bit in Kilkenny’s direction. TJ Reid will in all likelihood not have as small an influence this time, although Matt O’Hanlon has such a good record on marquee forwards – holding TJ two weeks ago and in the 2017 Leinster final, he did a great job on Joe Canning.

If he works the trick on Reid again, Kilkenny are going to need Colin Fennelly and Adrian Mullen to repeat the bailout from Wexford Park, particularly with the ongoing injury concerns surrounding Walter Walsh.

It doesn’t augur well either that Richie Hogan didn’t appear the last day because if Kilkenny are to impact at the business end, I think they need him back on song.

They should benefit from Cillian Buckley getting a game into him and now that he’s fit, it’s no surprise to see Huw Lawlor settling in well at full back. Since coaching him in UCD, I’ve been waiting for him to come through. He’s now physically stronger and will only get better.

Wexford have been much improved in 2019. They look replenished after a subdued season last year. Diarmuid O’Keeffe has been back in his 2017 form and Jack O’Connor will be fully recovered from injury this Sunday. They’re more athletic and physically stronger.

The one thing I’d like to see from them is a bit more tactical variety. They’ll almost certainly need goals to win this so they need to be a bit more fluid. Davy Fitzgerald talks total hurling but they need to change it up during games, be a bit more unpredictable.

They need to get Conor McDonald and Lee Chin into the danger zone – it took a couple of last-ditch interventions from Pádraig Walsh to stop an isolated McDonald getting goals the last day – and in a nod to the past get the Wexford crowd, who will be out in force, behind them, seeking out big men in attack and goals.

Goals would win it for Wexford but I’m not convinced they’re going to go after them. That means opportunities for Kilkenny. Croke Park will suit Fennelly and Mullen, who both had an excellent club final on their last visit, and I think that they can make that count.