Fever pitch: A year on from ‘Newbridge or nowhere’ and Kildare have it all to do again 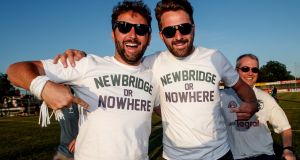 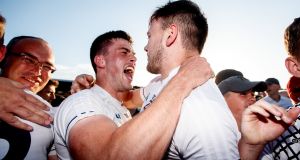 The temperature was holding and the fever still hot and especially around the ice cream vans.

Those first in headed straight for the shade, the rest armed with maximum strength sunscreen, sliced up watermelon and their cool dark shades.

And with the possible exception of ice cube bags and the nation’s water supply, there was no greater shortage in the country than a ticket for what was about to unfold at St Conleth’s Park in Newbridge –the pitch presumably well watered before the hosepipe ban.

In the end, somewhere between the heat wave and the white heat of the battle, there simply was no surrendering, Kildare holding out and with that sending Mayo crashing out – and it felt like every inch of home ground beneath their feet was counting.

Impossible as it is to actually quantify home advantage, last June’s round three football qualifier at Newbridge made a compelling case.

In the chaotically nervous ending, which included seven minutes of injury time, a free from Neil Flynn and replacements Niall Kelly and Eamonn Callaghan sent Kildare through to the last 12 of the championship and sent Mayo, the team that had lost four of the previous six All-Ireland finals, home.

Only it felt like there was more at stake. The week began with Kildare initially deprived of home advantage, the game fixed for Croke Park instead, before Kildare manager Cian O’Neill held his finger to the nuclear button for 48 hours, insisting it was “Newbridge or nowhere”.

By the Wednesday the GAA had conceded, backing down on their original “health and safety concerns” over at St Conleth’s Park, the official capacity of 9,020 reduced by 10 per cent to 8,200, once deemed all-ticket.

It was still 24 degrees at the 7pm throw-in, only it truth the grounds weren’t jam-packed. Kildare’s two-point win, 0-21 to 0-19, came after they’d already ended a nine-game losing streak with qualifier wins over Derry and Longford; Mayo had been left shaken after their Connacht quarter-final defeat to Galway, and by the close of season manager Stephen Rochford was gone.

“Whatever was in Kildare that night, whether it was the whole thing beforehand, they all came together as one, definitely had a different feel to them compared to anything before that season, and since,” says Ger McNally, sports editor at the Kildare Nationalist, and commentator with Kildare FM.

“I think genuinely, the week leading up, did make a difference. Morale was still at a low ebb after the Carlow defeat, and the fact Cian O’Neill came out fighting, stood up against the GAA, who it felt like were trying to push their weight around, hit a nerve, without a doubt, and I think that inspired the players as well.

“Then O’Neill had nothing to lose, really. If Kildare had lost that game, I think he would have been out of a job, basically. It was the end of his third year, and if it was played in Croke Park, and they’d lost, I don’t think he would have stayed on. So maybe he spotted an opportunity, to galvanise everyone, rather than focus on the losses already that year.”

It was one of the most special nights in Newbridge since the qualifiers were introduced in 2001. That first year drew a crowd in excess of 15,000 when Kildare beat Donegal by a point in the second round, 1-17 to 1-16; 2010 feeling equally special when they drew with Antrim, after extra-time, Dermot Earley playing the same day as his father’s funeral.

“I think the important thing is we kept the circus, if that’s what you want to call it, totally away from the players themselves. The bottom line was, we honestly, I’m very clear, we were not going to play that match anywhere but here, end of story. Simply because that’s what the rule stated.”

By the same rule, Kildare were again entitled to home advantage when they drew Tyrone for this evening’s same juncture in the championship. Only Tyrone are perhaps a different prospect: under Mickey Harte, they boast one of the best qualifier records of any county, losing only three in 30 matches under his tenure, and only four in all. They’ve also been here before, beating Kildare in Newbridge in the 2013 round three qualifier, Johnny Doyle’s last senior game for Kildare, and last year’s beaten All-Ireland finalists know exactly what Kildare did last summer.

The GAA were also still advertising ticket sales for the game on Thursday evening, and clearly the pre-game hype is not the same. Tyrone have never lost to Kildare in the championship, also winning the 2009 quarter-final, and McNally also senses some lingering apathy among the Kildare supporters – at least compared to last year.

“It doesn’t feel the same, not yet, although it’s still a Saturday evening in Newbridge, the weather should be okay, and even if it’s not sold out in advance I suspect there will be a good walk up on the day.

“Last year was special, I remember getting to Newbridge at 2pm and there were Mayo supporters around already, and then at 5pm the gates opened, it was like the sales in America, everyone rushing in to find their spot. The heat wave and the sun added to the occasion.

“But all this year there has been a little bit of apathy in the Kildare support, compared to other years. The league campaign was uninspiring, and the Leinster championship as well, almost beaten by Longford. Look at Antrim last week, a capacity of 2,100, and it looked to me there were no more than 1,000.

“Tyrone would be a lot stronger, mentally, I think Mayo wilted a little under the pressure last year, weren’t in great form themselves, maybe lacked the stomach for a fight. I don’t think Tyrone will be like that at all. And I think Tyrone will actually prefer a tight pitch like Newbridge, because it is definitely a tight pitch, compared to Croke Park. Whether Kildare can buy into that home ground feel again we’ll see, but I think they’ll need to play better again.”

Either way it’s now or nowhere.