With Páirc Uí Chaoimh unavailable, GAA looking at possibility of a double bill 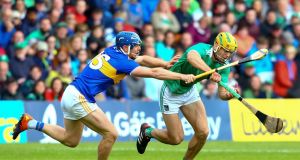 Tipperary’s Jason Forde and Limerick’s Dan Morrissey will be renewing their rivalry in the Munster final at the Gaelic Grounds. Photograph: Ken Sutton/Inpho

Croke Park is under consideration to stage this summer’s All-Ireland hurling quarter-finals. Whereas no announcement can be made until the quarter-final pairings become clear over the next three weekends, the choice will likely be between the headquarters stadium and Thurles.

This could lead to headache for administrators if Limerick beat Tipperary in Sunday’s Munster final and Dublin defeat either McDonagh Cup finalists, Laois or Westmeath, in the preliminary quarter-finals in a fortnight, as it would mean that one of the counties, who are on the same side of the draw, would have home advantage over the other.

Feargal McGill, the GAA’s head of games administration, said on Thursday that whereas they had to wait for the identity of next weekend’s winners and losers to emerge, certain decisions had been taken already.

“The priority for the GAA is to stage the matches as a double bill. In the past two years with a new stadium available in Cork, we thought that putting the matches on individually might work but having considered that, we now feel that it’s better to keep them together.”

The redeveloped Páirc Uí Chaoimh opened for inter-county activity in 2017 with a weekend of hurling quarter-finals on the Saturday and Sunday. Both Tipperary-Clare and Waterford-Wexford drew reasonable crowds of 28,567 and 31,753 respectively, which cumulatively exceeded the new stadium’s capacity but not by as much as expected.

A year later and the novelty appeared to have worn off. Wexford and Clare were scheduled for the Saturday of the quarter-finals weekend with the other, between Limerick and Kilkenny, scheduled for the following day and in a different venue, Thurles.

Amidst unhappiness about having to travel to Cork from within Wexford and Clare, as well as both counties having endured a demoralising conclusion to their provincial campaigns, it wasn’t surprising that the attendance was disappointing, coming in at 10,225.

Even taken in tandem with Thurles, the total of 28,851 was barely bigger than the less well attended quarter-final from the previous year.

Earlier this year, Cork ruled out the quarter-finals taking place in Páirc Uí Chaoimh, as remedial work, relaying the surface, was required to address the ongoing problem of the stadium pitch. Nowlan Park, another potential venue although not really big enough for a double bill, is hosting a concert that weekend.

Limerick’s Gaelic Grounds are seen as too inaccessible from Kilkenny or Wexford, one of whom will definitely feature.

If it’s Limerick who lose on Sunday, any Laois/Westmeath/Dublin-Limerick quarter-final would comfortably be accommodated in Thurles and should Tipperary lose, the distinct prospect would be that the relevant quarter-finals would take place in Croke Park.

Even if it were Dublin who qualified, the argument is likely to be that they played Tipperary in the 2014 All-Ireland quarter-final in Semple Stadium.

Were that to happen it would be the first time in nine years that the quarter-finals have been staged in Croke Park.