Limerick and Tipp have opted for very different approaches

Can a fully locked-and-loaded Limerick first 15 make use of their home advantage? 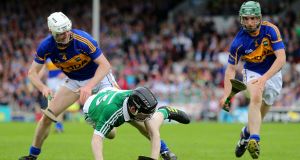 For all the anomalies attending this genuinely iconic event – its new slightly detached status, like a spur line – this is a match of real significance. That is specifically because the two teams, the All-Ireland champions and the favourites to succeed them, have adopted very different approaches.

It’s almost accepted as given that Limerick would struggle to retain their title should they lose on Sunday for what would be a third time in this year’s Championship but would they?

A year ago their ratings took a dip when getting trimmed by Clare in their last provincial match, but they persevered and managed to produce their best form when the Championship was for keeps – from All-Ireland quarter-final on, reeling off successive victories against Kilkenny, Cork and Galway.

Tipperary are different. There are a number of influences on the team’s resurgent form: presumably the bleak experience of last year when they didn’t even get out of Munster is a driver, but there is also Liam Sheedy’s return as manager and his familiar talent in blending an operation, coaches and players to optimal effect.

He is well aware of how the Tipperary psyche operates, and the need for momentum and consistent performance. As a result there has been the widely remarked on adherence to a best team whereas Limerick have deliberately rotated principal players.

The problem with this approach is that it is disruptive, and after losing both matches to the other Munster qualifiers, Limerick are actually short of quality performances compared to 12 months ago, when in the same provincial fixtures they beat Tipp and drew in Cork with 14 men for three-quarters of the match.

In Thurles, Limerick’s watered down selection competed, and could have been even closer at the end. However, John Kiely conceded that they were “out-worked” by Tipp – something that rarely happened last year – and in the process came under unusual pressure in the normally predominant half-back line.

Can a fully locked-and-loaded first 15 with home advantage and a renewed sense of urgency rectify that?

Tipperary have injury concerns, and although Limerick’s reliable forward option Barry Murphy is also gone for the season, the loss of Patrick Maher diminishes more than Sheedy’s options.

The advantage has to lie with the team that has produced consistently to date, whatever about the future implications of that consistency.