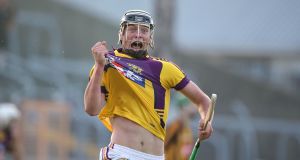 Wexford’s Conor McDonald celebrates a goal in extra time during the 2013 Leinster under-21 hurling final against Kilkenny at Wexford Park. Photograph: Morgan Treacy/Inpho

Tom Dempsey was in London in the summer of 2013, working. On a soupy Wednesday night in July, he found himself alone in a room with his phone app tuned to South East Radio and the voice of Liam Spratt coming out of Wexford Park. Wexford were playing Kilkenny in the Leinster under-21 hurling final and for Dempsey, it wasn’t a pleasant listen. Not because Wexford were getting beaten – purely because they weren’t.

Radio is by some distance the worst way to watch your team, of course. The lack of pictures means that you see too much. Your imagination overfills the blanks. Every possession for the opposition feels like a goal chance; every move by one of your own is an open trapdoor. Wexford had every chance and for Dempsey it felt like hell swallowed neat.

Dempsey had been on the committee that had picked JJ Doyle to take over the under-21s back at the end of 2012. He and Adrian Fenlon met Doyle in the Riverside Hotel in Enniscorthy armed with a stack of arguments to coax Wexford’s three-in-a-row All-Ireland-winning camogie manager into the role and left pleasantly surprised that they had hardly needed any of them. Doyle wanted the gig, had his selectors lined up and was ready for lift-off.

And now here they were. Burning through the sky, two hundred degrees. They had Kilkenny and then they hadn’t. Kilkenny had them and then it changed again. Deep into the second period of extra time with the sides level, a dropping ball in the Kilkenny square found its way past goalkeeper Aaron Duggan and enough of it crossed enough of the line for the umpire to go for the green flag.

It might have been a goal and it might not. You’re talking an inch or two, no more. Eventually, it was given to Niall Murphy of Crossabeg-Ballymurn. More importantly, it was given right at the point where Kilkenny had no time to get it back. Carlow referee Pat Murphy blew the long whistle in more or less the next breath and that was that. Wexford 1-21 Kilkenny 0-21. Bedlam.

Dempsey doesn’t finish the thought but we can do a little surmising without causing much offence. Let’s say the umpire decides the ball stopped on the line rather than over. The ref blows for full-time, everyone goes home, to meet again the following week for a replay in Nowlan Park.

Kilkenny, with nine of the side left over from the previous year’s All-Ireland final against Clare, gather themselves and take care of business second time around. They plough on into a future unchanged. Wexford do likewise. The big wheel keeps on turning.

Why should it have been otherwise? In the 10 seasons previous to 2013, Wexford teams had played Kilkenny 17 times in senior, under-21 and minor championship. They had lost 15 of those games. For their last senior win, you had to back to Mick Jacob’s injury-time stunner in 2004, back to when Conor McDonald was all of eight years old.

“You had a generation of Wexford players who had never seen Kilkenny beaten,” says Niall O’Connor, who was one of Doyle’s selectors with that under-21 team. “Even going back to when I played, you were nearly always going in against Kilkenny three or four points down in your own head.

Fear of Kilkenny was handed down like a family heirloom. Fighting it was like taking up arms against your own DNA. There would always be a day here and a day there where Wexford would plant a flag and maybe catch Kilkenny looking the other way. But it wasn’t often and it was never for long.

“I remember playing the 1993 Leinster final against Kilkenny and we hurled them off the pitch,” says Dempsey. “But the game ended in a draw. We were four points up but they came back and got a draw.

“And afterwards, Willie O’Connor came over to shake my hand. Willie is a gentleman and he definitely didn’t mean any malice or anything. But he put out his hand and just said, ‘Hard luck, Tom.’ It was as if we were after being beaten. He was basically saying, ‘God, you missed your chance there.’

“That’s the subconscious hold generations of Wexford players had and have had with Kilkenny. I was brought up with Kilkenny dominance and it had seeped into our demeanour and our psyche.”

All of which made the rise of JJ Doyle’s under-21 team a shot of pure adrenaline into the Wexford bloodstream. Doyle’s achievements with the camogie team gave him a bit of caché around the county and it meant that the odd player who might otherwise have leaked out into civilian life was kept involved.

O’Connor tells a story of one player who crashed his car on the way to trials for the under-21 panel. He wasn’t hurt or anything but the car was done for. Waiting around for the recovery truck would have meant missing the trials though, so he rang a friend to come and pick him up and abandoned the car on the side of the road until the following day.

That was the sort of energy that was suddenly in Wexford hurling. At his first team meeting, Doyle told them he was here to win All-Irelands. Six months later, after the win over Kilkenny, a few of the players came to him afterwards and admitted they had laughed when he said it.

They never did win their All-Ireland. But they changed Wexford hurling all the same. Between 2013 and 2015, they won three Leinster titles in a row. Of at least equal importance was the fact that they did it beating Kilkenny three years in a row. A run like that was unimaginable when they started out.

After that squeaker in 2013, they met again in the semi-final the following year. This time Wexford went to Nowlan Park and left nothing to chance, walking out the gate with a 10-point victory. The margin in 2015 was even wider, Wexford putting up a rampant 4-17 to 1-9 win to complete the hat-trick. Belief is a wonder drug.

“We never said to them that you need to improve 10 per cent or 15 per cent to compete with Kilkenny,” O’Connor says. “All we said was that two or three per cent would make a huge difference. And once they got across the line that first year, the confidence that came into them raised it again.

“It gave them that belief that they could do it. For so many years, lads would say, ‘Ah, sure this is a lost cause.’ If you don’t have that belief, all it takes it going a few points behind and you won’t put the same effort into a 50-50 ball. People always talk about how hard it is to put Kilkenny teams away – that’s because they have the belief that all they need to do is keep chipping away if they’re behind. They don’t get desperate, they don’t go for goals too early. They use that belief to keep them going. We were without that for years against them.”

The comet has had a long tail. In 12 matches against Kilkenny since 2013 across minor, under-21 and senior, Wexford have won five, drawn one and lost six. Those under-21 teams have fed the senior a steady diet of hurlers and confidence since the middle of the decade and have especially blossomed under the current management.

All the pillars of those teams are the mainstays of the senior side now. McDonald scored a hat-trick to beat Kilkenny as a minor and then played on all three under-21 teams. Lee Chin, Liam Ryan, Paudie Foley, Jack O’Connor, Kevin Foley, Cathal Dunbar. Every one of them tasted a big day against Kilkenny and some of them more than one.

It has stood to them ever since. In the three games they’ve played against Kilkenny under Davy Fitz, the aggregate score stands at Wexford 2-59 (65) Kilkenny 4-53 (65). You have to go back to the mid-1990s for anything comparable. If this Wexford team has its limitations, a fear of Kilkenny is no longer one of them.

“You can’t say that Wexford will win on Sunday,” says Dempsey. “But what you can say is that the Wexford team going out don’t hold the same level of awe or respect or fear of Kilkenny that was present before and even years ago.

“I think that period of success at under-21 really did change that, for this group of players anyway. There’s an awful lot more needed, of course there is. We need to keep our finger on the pulse at underage and keep feeding players into the senior set-up. We can’t let it drop off again.

“But there is no doubt that fear factor with Kilkenny hasn’t played as big a role with this group as it did for teams that went before and a big part of that has to be down to those three years of beating them at under-21 level.”