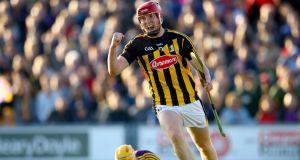 When TJ Reid was held scoreless from play in Kilkenny’s final round-robin encounter against Wexford, it was his young club mate Adrian Mullen who stepped up.

The 20-year-old has long been touted as the next big thing in Kilkenny, Mullen is the current Club Hurler of the Year after his exploits for Ballyhale Shamrocks in winning the All-Ireland in March. He scored 2-1 in the Leinster final and 0-5 in the St Patrick’s day decider.

Before that he played in three consecutive All-Ireland finals with St Kieran’s college. And for Kilkenny, he scored 1-9 in winning the 2017 Leinster minor title, and was subsequently selected on the inaugural minor team of the year.

He was born in the same year that Brian Cody began his first season as Kilkenny senior hurling manager, and in Sunday’s Leinster final against Wexford he’ll aim to prevent Cody from going three years without a provincial triumph for the first time.

Mullen and Reid are two of four Ballyhale Shamrocks players to have featured for Kilkenny so far this summer, and the foursome have together contributed over two thirds of the team’s scoring total and just under half its total from play.

Reid alone has scored 52 per cent of Kilkenny’s goals and points in their four Leinster round-robin matches, with an incredible 5-42. And he has also scored 24 per cent of the team’s overall figure from play with 3-7. Carrying the burden, just a little then.

His fellow Ballyhale Shamrocks attackers are next best, Mullen with 1-5 (12 per cent) and Colin Fennelly with 1-4 (10 per cent). Ballyhale defender Joey Holden is one of 18 scorers for Kilkenny in Championship 2019, and his one point brings his club’s contribution to 48 per cent of the scores from play.

Reid, Mullen, and Fennelly also scored 2-13 from play between them in the club All-Ireland final when they were the three top marksmen from play on display.

Mullen, though, has not had it all his own way since making the transition to the senior intercounty ranks. Only six days before facing Wexford, he was replaced after 32 minutes in the team’s defeat to Galway at Nowlan Park. After picking up an early yellow card he struggled with the pace of the game and under the puckout. Two balls flew off his hurl and he was in possession only three times - once giving it away with a sloppy pass and moments before he was substituted he struck a wide. Which was still probably his best moment.

Nevertheless, a week later when Reid was held by Matt O’Hanlon to 0-0 from play and only 10 possessions – aside from scoring seven important frees – Mullen provided the crucial moments in a draw which kept Kilkenny in the championship.

In Wexford Park he had ball in hand on 13 occassions, he scored 1-3, and he assisted two more scores. He attempted a score on eight occasions – so 10 of his 13 possessions resulted in a goal or point opportunity and 1-5 was the end product. Mullen tends to come in and out of a game but does provide big impacts when he’s on the ball – the Ballyhale half forward was assisted for 1-1 by Fennelly, and by Reid for another point. He's worth persisting with, even in his quiet spells, and his two club mates in the attack trust and look for him.

His third point came after a superb catch he made from a long puckout – Mullen was hit with five of Kilkenny’s 24 long puckouts as Eoin Murphy tried to vary his restarts and exploit height mismatches in the Wexford defence. He raised another white flag from almost the exact same angle and distance, on the 45-metre line to the right hand side of the field, later in the second half.

His other three points this summer have all been from tight on the left wing within the 21-metre line, like all great marksmen, the left-sided hurler seems to know his preferred angles and he isn’t afraid to get into them two zones and back himself.

His goal, meanwhile, came after a majestic first touch, followed by a beautiful weave inside and a cool finish into the corner – this time off his right side.

But what will have pleased his manager as much as anything else is his two turnovers, despite his obvious natural talent and his poacher’s instincts, he will not remain in Cody’s good books unless he showcases both sides of his game.

And twice against Wexford his age and lack of experience was magnified as he casually lost possession. All in all though, this performance felt like a young man proving that he’s ready to carry some of the burden.

Kilkenny have largely been written off in terms of challenging for All-Ireland glory this year, but the current squad still contains 10 players with All Star awards and five who have won multiple awards: Eoin Murphy, Paul Murphy, Cillian Buckley, Richie Hogan and Reid. The five who have won one All Star are Holden, Pádraig Walsh, Walter Walsh, Ger Aylward and Fennelly. Only one of the 10 is aged over 30 – Reid is 31.

Not once since the Leinster round-robin series began, though, have all 10 All Stars started a Championship match for Cody’s team, and only once in those 11 matches have all 10 been on the pitch at the same time.

That was for the second half of last year’s Leinster final replay against Galway when Fennelly and Hogan came off the bench. On only two occasions have their multiple All Stars all started at once. And their most recent encounter, the draw against Wexford, was the first time in six Championship matches that more than three of that quintet have started together.

So they’ve not been at full strength over these past two years, and for many of those appearances players have been rushed back from injury, having played very little hurling. As much as Kilkenny blooding new talent like Mullen is vital, actually getting all of their leaders on the field and in shape is equally as important.

Mullen scored two goals in 50 minutes against Laois in the Leinster Under-20 quarter-final on Monday night, he’s a man in form and it all seems to be coming together for him ahead of the biggest day of his sporting life to date.

He’s also got a major part in all of the pieces coming together for Kilkenny, this Sunday and for what’s to come afterwards.