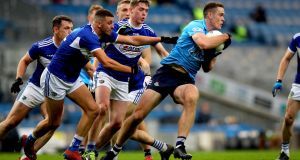 In the 68th minute of the usual Leinster semi-final cakewalk for Dublin, Paul Mannion cut in off the right and fed Ciarán Kilkenny bearing down on the Laois goal. Kilkenny had already had a terrific afternoon, scuttling around to gather up 1-3 for himself and feeding everyone around him too. On this occasion, with Dublin long since out the gap, he decided to flick a fisted point over the bar.

It would be scarcely worth the mention but for the fact that as the umpire moved to grab the white flag, a frustrated yelp echoed around a deserted Croke Park.

In taking his point, Kilkenny incurred the momentary wrath of Mannion, not because his team mate was hoping for a return pass but because he couldn’t fathom why Kilkenny wouldn’t just bury another goal. To be clear, Dublin were 18 points up when this happened.

Laois came, they hung in, they got to the first water break only a point behind. But in the end, they got the same treatment as every other Leinster semi-finalist gets from Dublin. The years roll by, the regimes change, the players turn over and the results stay the same. It’s a double-figures beating now and it’s difficult to imagine a time when it won’t be.

“Yeah, they’re everything I thought they were going to be,” said Laois manager Mike Quirke afterwards. “They’re just amazingly efficient up front every time they get possession, which was probably the difference in the game for me.

“Early on we had close to the same amount of shots as them in the first half and we went in nine or 10 points down, which is incredible and it’s testament to the work that they’ve done to be that accurate in attack. We did well in our kick-outs in the first half, we forced a lot of turnovers, we were really pleased in most aspects bar the scoreboard.

“You can hear Jonny Cooper at the end of the game when they’re up by 19, 20 points or whatever it is and he’s roaring about let’s get another three scores. It’s just leadership and efficiency that they have. But you can see how far ahead of us they are in terms of their physicality and their game play, offensively the way they move the ball.

“But they’re after winning five All-Irelands in a row and we’re happy to have stayed in Division 2 and we’re trying to build a team that can compete with teams at this level, and obviously they’re the pick of the bunch.”

To their credit, Laois were game enough here. They kept three forwards up for most of the game, up until the heads inevitably started to drop. They even had a goal chance early on, Evan O’Carroll smashing a shot off the post after cutting in from the Cusack Stand side. Gary Walsh took a fine score under pressure, Paul Kingston did the same.

At the other end, goalkeeper Niall Corbet put up stout resistance, denying first Brian Fenton and then Niall Scully soon after. All in all, it got Laois to the water break just 0-3 to 0-2 behind. Nobody imagined they were going to keep stride with the champions the whole way but they had hung in there longer than most expected.

Gravity always wins, though. Kilkenny picked off his first of the day in the 24th minute and almost immediately after, Dublin had their first goal. The enterprising Scully was involved again but it was Fenton who injected the pace and sent Seán Bugler through the middle. His shot beat Corbet and deflected in off a despairing Laois hand on the line.

It put Dublin 1-4 to 0-2 ahead and wiped any small hint of a challenge from the game. From there to the end, it was just a matter of what sort of total they would run up and who would do the running.

Paddy Small had a desperately scruffy afternoon at corner forward and kicked three wides before being replaced at half-time. Cormac Costello came off the bench on 43 minutes to put in a hungry half hour, racking up seven points and presumably staking his claim for a start in the final next Saturday.

Kilkenny sallied in for a goal soon after half-time, not bothering to pick up James McCarthy’s pass and instead finding Corbett’s bottom corner on the half-volley. He was unimpeachable for most of the game and Fenton was his usual model of excellence. Bigger challenges lie ahead.

“I think we probably wouldn’t be happy with what we were doing in the first quarter,” said Dessie Farrell. “We were turning over a lot of balls. We didn’t come out of the traps the way we would have liked. That’s definitely something for us to look at.

“It’s difficult to know. We’ll have to look at the tape and see what was going on there but yeah, definitely some needless turnovers. I don’t know whether it was over-exuberance or a little bit of lethargy in terms of not really putting the foot on the throttle there at times.”