GAA faces strangest weekend – will there be a season at all?

This weekend’s matches will go ahead but, after that, who knows what will happen? 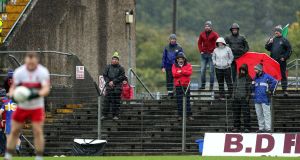 The GAA face into the strangest of weekends. Coverage that should have been all about the resumption of the intercounty season and the big issues at stake for counties in the Allianz Football League has instead become a far more existential reflection on whether there will be a season at all.

We can – just about – take it that the weekend’s fixtures will survive intact but after that? Will the league run its course next weekend and can the championship survive? It is scheduled to get underway in earnest in a week’s time with Dublin facing Laois in the Leinster senior hurling championship and the dual purpose (Munster quarter-final and league final) fixture between Limerick and Clare.

Confirmation on Thursday night that if the Government goes to Level 5, there will be no further sports events – elite or not (although there may be some exemptions) – immediately placed the GAA season under a canopy of gloom, as the National Public Health Emergency Team (Nphet) on Friday again proposed Level 5 restrictions.

Senior figures in Government are expected to meet on Saturday to consider this advice. Whatever they decide, there is unlikely to be any impact on this weekend’s fixtures, which is just as well as some teams will already be travelling.

From Monday on, though, it’s anyone’s guess where the GAA will find itself. One source in Croke Park was of the definite view that they were being ‘softened up’ for Level 5 whereas another senior source separately remained confident the season would proceed.

Should Government take the advice and impose Level 5 restrictions, some within the GAA weren’t even certain that there wouldn’t be an exemption for elite sport after all, as that had been in Nphet’s original recommendation on the matter two weeks ago.

It’s a topic that has stirred opinions, the two prime examples of which within the GAA came on Friday evening with news that the Gaelic Players Association had decided to give the new season their backing – subject to a couple of safeguards.

These were: stronger testing protocols, stricter compliance and oversight of Covid-19 protocols in all counties, and the use of the safest venue for games (location and facilities) – presumably a reference to the long-distance hauls some counties are making this weekend, for example Kerry travelling to Monaghan and Longford to Derry instead of playing at neutral, halfway house venues - a proposal that the GAA turned down.

It will be interesting to see if there is any new thinking in the selection of venues for the last round of the league next weekend.

These views came after an extensive canvass of the GPA membership, which came in with a decent response rate of 76 per cent. Headline figures for the three options offered were: 52 per cent were happy to play on and a further 24 per cent happy if the implementation of protocols improved.

There were also 24 per cent who said they weren’t happy – up by seven per cent on a poll earlier in the summer.

If the timing of the consultation appeared curious just a day before the season restarted, it was intended to give the players their voice with as much up-to-date data as possible.

Then there was a radio interview with former GAA president Liam O’Neill, who called on the GAA to abandon the season.

Speaking on Raidió na Gaeltachta’s Tús Áite, O’Neill, who was president of between 2012 and 2015, said:

“I’m saying now that the intercounty games shouldn’t go ahead. It’s time to put a stop to it now. The numbers are going up every day. If we think that’s the right thing to do, then we should do it, regardless of the consequences. There are more important things than matches. Nothing is more important than people’s lives.

“As someone who has an interest in GAA, as someone who’s deeply involved in my own club in my community, I don’t think it’s worth the risk.”

In an interview with The Irish Times earlier this week, he had advised that people would be understanding of any decision to call off the season at this stage in recognition of the steadily deteriorating public health situation, which saw another 1,000 coronavirus cases announced in the state on Friday.

The GAA’s entanglement with cases of infection has recently crystallised around Covid rates in localities where county final celebrations had taken place with obviously no attention paid to HSE guidelines.

This weekend the All-Ireland under-20 football semi-final between Kerry and Galway sees both teams affected by Covid withdrawals.

Fermanagh, who pressed for a postponement of their trip to Clare, another of the long hauls, but were turned down by Croke Park’s Central Competitions Control Committee, had to name a traveling party of just 18 after a coronavirus outbreak left 10 cases and seven close contacts within Ryan McMenamin’s panel.

It has to be a growing concern for the GAA that counties are now routinely reporting infections among players. Whereas these have been capable of being isolated and quarantined in the past number of weeks, now the season is up and running, teams may well find themselves having to rule out players with Covid or their close contacts.

Donegal manager Declan Bonner, whose team plays Tyrone this weekend in a rehearsal for the Ulster championship in two weeks and who also had training interrupted by Covid, told Highland Radio that it hadn’t helped preparations.

“We just got the lads back last week. Look it’s been challenge after challenge the past number of weeks and months but look, I’m sure it’s the same for every county team manager.”