Intercounty GAA and National Leagues return: All you need to know guide

What games are left, how’s the format changed, and what about the hurling? 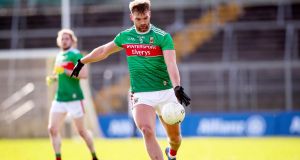 Mayo are in serious danger of dropping down to Division T wo when the league resumes this weekend. File photograph: Inpho

The long wait is almost over as intercounty GAA returns this weekend - over seven months after the national leagues were postponed due to the outbreak of Covid-19. They’re back, but not exactly picking up from where they left off.

For starters, there’ll be no crowds as the country continues to follow Level 3 restrictions. The GAA has extended this to Ulster counties too. Also, the team who finishes top of each division will be declared the winner, so no league finals.

After the remaining two rounds are completed, over the next two weekends, the top and bottom two teams will be promoted/relegated. The main reason for the association in completing the leagues then is to decide places for next year’s All-Ireland championship.

For the Tailteann Cup that is. The new tier two football competition has been postponed until 2021, and it’ll comprise of next year’s Division Three and Four counties who do not go on to reach their respective provincial finals. Instead of joining the All-Ireland qualifiers. It's somewhere none of the current Division Two or Three teams will not want to end up.

Meath are already relegated but who’ll go down with them? Mayo are currently in seventh, with -15 scoring difference and a negative head to head with Monaghan above them. While they drew with Donegal who are also two points and one place ahead. Kerry could take top spot with two wins, if an injury-hit Galway fail to do likewise. Only a point separates them and Kerry won their meeting back in February, but there are others in the reckoning, including Dublin.

Fermanagh are currently bottom, and failed in their attempt to postpone Sunday’s match against Clare after a number of their panel returned positive Covid-19 tests. They are one defeat away from relegation, and a walkover would do that, but every other team in the division still has a chance to go up. Roscommon and Cavan have been yo-yoing between Division One and Two in recent years but unexpected poor results in their first two matches left things wide open here.

Cork need only one point from their final two matches to make sure of their promotion. Down, in second have the head to head over Longford who they share the same amount of points with. Derry and Offaly are a further two points adrift. Louth need to avoid defeat to Cork on Saturday if they want to stay in Division Three, while Leitrim v Tipperary the following Sunday could decide the other relegation spot.

There is of course no relegation from the bottom tier, and the team at the foot of the table - London - will play no more part due to travel restrictions. Waterford and Carlow will both receive walkovers from their remaining matches against the ‘Exiles’. There are three teams in third with six points, one point less than second, with Limerick leading the way with just one more.

This year’s hurling leagues were already completed as far as the knockout stages before the nationwide lockdown. The GAA has since decided to abandon the Division One quarter-finals and subsequent semi-finals, and go straight into a decider between the teams who finished top of 1A and 1B. That final between Clare and Limerick will be doubling up with their Munster SHC quarter-final clash. The finals of the lower divisions will be played over the next two weekends. Donegal beat Armagh in the 3A final in March.

The last competitive intercounty football match was played between Armagh and Fermanagh on March 7th. Only 224 days later Wicklow will host Antrim with the 12.30pm throw-in making it the first match of what (hopefully) will be a chaotic nine weeks of GAA action. There’s only one point between the two teams, with Antrim currently second and Wicklow joint-third, in Division Four.

The top two teams in the second tier, these counties provided one of the most entertaining matches in recent years during the 2018 qualifiers . Roscommon - in the Super8s for the last two years - are intent on bouncing straight back into Division One after last year’s relegation, while Armagh haven’ t been at those heights since 2012.

Division Two is so hard to predict - what could turn out to be a relegation decider contains two teams who could also end up battling it out for promotion if they win this weekend. Clare have the head to head advantage over Kildare who they share the second from last spot with, and the Lilywhites have a tricky fixture with Cavan next. They may need to win their last game to avoid the drop. If Westmeath lose to Laois on Saturday, and again on the final day, it could be them going down instead.

Galway are top of the table, and if they can stay there they’ll win their first National League since 1981. However they look set to be without their Moycullen contingent after the recently crowned county champions pulled all their players due to a number of positive cases in the community. Shane Walsh and Ronan Steede are also out injured. Dublin made a slow start to Dessie Farrell’s reign as manager, with two draws and a loss in their five games, but if results go their way elsewhere this could turn out to be a league decider.

Cork are five from five and look set to return to Division Two, with Down and Longford behind them with a share of seven points. The latter however have a trip to Derry and the Rebels left to play - leaving Down in pole position to win promotion. A win in this final game against Louth could be the result which keeps them out of the Tailteann Cup in 2021.

GAAGO will stream all non-televised Allianz League games to viewers in Ireland and abroad. The streaming service was previously only available outside of Ireland and that will remain the case for matches broadcast on domestic TV. Pay-per game access will be priced at €5. RTÉ, TG4 and eir Sport will all broadcast matches - this weekend’s live games have already been announced although the broadcasting schedule for the final weekend of games has yet to be revealed.

This Saturday, Armagh’s clash with Roscommon will be live on RTÉ2 at 5.30pm, before Dublin v Meath on eir Sport1 at 7pm. On Sunday both Division One matches - Galway v Mayo at 2pm and Donegal v Tyrone at 4pm - will be live on TG4. There’ll also be deferred coverage of Kildare v Cavan on the same channel.

If two teams finish up on the same number of points, the result of their head-to-head meeting will decide who finishes on top. If that ended in a draw, or three or more teams are level on points, then scoring difference will separate them.

1 Gerry Thornley: After 32 weeks the Six Nations is back up for grabs
2 Extremes of sweet and sour for Solskjaer as Man United show signs of revival
3 Arsène Wenger: Arsenal was a matter of life and death to me
4 Stockdale and Ringrose on board with expansive Irish game plan
5 Bennett girding his loins for impossibly unpredictable Vuelta
Real news has value SUBSCRIBE

Jason Holder ‘disappointed’ in Australia and Pakistan not taking the knee 13:04
Arsène Wenger: Arsenal was a matter of life and death to me 10:06
Extremes of sweet and sour for Solskjaer as Man United show signs of revival 10:08
Slaven Bilic hits out at €16.95 pay-per-view for West Brom’s draw with Burnley 08:31
Patrick Mahomes shines as Kansas City beat Buffalo Bills 08:14