Donegal manager Bonner will not discuss injuries to players

Modern trends are leading to the non-disclosure of medical data 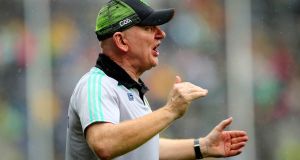 After Sunday’s gripping All-Ireland quarter-final draw with Kerry, Donegal manager Declan Bonner was asked about the fitness of full-back Neil McGee, one of the players omitted from the published team. The reply was blunt. “I’m not going to talk about injuries, sorry.”

It was a surprising response to a media conference that had already received an update from Bonner’s Kerry counterpart Peter Keane on some of the injuries in his panel. It is, nonetheless, a developing trend, especially in professional sports.

Rugby international Conor Murray was one of the players in the sport who chose to keep secret details of an injury. Munster coach Johann van Graan was asked about the player’s injury on several occasions, and always took the same line.

“I can’t comment on Conor,” he said, telling RTÉ at one stage that the player had asked Munster not to speak any further on the issue. “Upon his request I can’t comment on his injury,” said van Graan. “He’s requested that his information remains confidential. I can’t really comment on the injury. I’ve got to respect that.”

Professional medical directives are that the information is confidential because the individual is a patient and not simply a player, and any dealings are private. Medical personnel will not disclose any information, and if they do it will be of a generic nature.

It is up to the player to decide whether he or she wants the nature of an injury divulged. Sensitivities have changed over time, and GDPR, which governs inter alia the disclosure of personal data, has also impacted on the area.

The GAA’s medical, scientific and welfare committee – on which Donegal team doctor Kevin Moran and former Dublin manager Dr Pat O’Neill sit – is in charge of developing guidelines.  Injury disclosure and non-disclosure have come up for discussion at the committee, but there has not been any policy formulated on the matter. It is expected that guidelines will be issued in future to assist in dealing with the subject, and they would have to acknowledge that medical professionals have to abide by their own professional regulations.

There may be a greyer area in which more general disclosures could be made, but that could simply lead to further ambiguity.

A sprained knee could be anything from multi-ligament, including cruciate, to bone damage to a minor sprain. Unless there is detailed information on the damage and, more importantly, the prognosis, any disclosure will not be particularly illuminating.