Kerry and Donegal finishes level after a mesmerising match 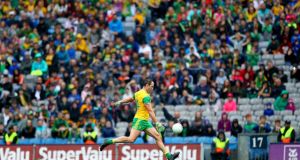 A year after Kerry had produced a cracking draw against Ulster opposition in Clones, they repeated the trick in Croke Park on Sunday in the clash of Munster and Ulster champions.

Unlike the Monaghan match 12 months previously this wasn’t a finagled deliverance in the dying seconds but a fair distribution of spoils after a mesmerising match that was level no less than 16 times from the throw-in.

It leaves us all none the wiser about the likely pecking order beyond the expected prospect of a harder finish for Donegal than Kerry but still all to play for with Mayo still in with a shout provide they can win the last match in a fortnight.

For all that this All-Ireland quarter-final was played in the modern idiom with shifting blocks of players moving backwards and forwards it also maintained traditional virtues of sweeping attacks, going for it and the edge-of-the-seat appeal of breathlessly contested man-to-man duels as well as an exhibition of the contemporary art of kick-outs.

The suspicion that Kerry’s greater sparkle in the forwards might decide the match proved slightly misplaced but sparkle they did with Paul Geaney bang back in form with 1-4 from play, the goal looking for a while like it would break the match in favour of the Munster champions, and almost had another but fired over the bar in the 26th minute when trying to round the ‘keeper.

Donegal responded with an impressive coalition of the older guard of captain Michael Murphy and Patrick McBrearty and the prodigious young Oisín Gallen, who came on as a black-card replacement just before half-time and had a great second half.

If there was disappointment it was in the subdued performance of Jamie Brennan, whose form to date had been excellent this year. ‘Subdued’ is the right word because his marker Tom O’Sullivan gave a memorable display, both in handling the threat of Brennan, and in his trademark counter-attacks.

The match ebbed and flowed from the start, once the usual adjustments had been made with three changes to each team’s programme selections. These looked to hit Kerry harder, as David Moran, so dominant in the thrashing of Mayo, was pulled with a reported foot injury, leaving a callow centrefield of Adrian Spillane and Diarmuid O’Connor.

Donegal had their own problems in the area in the loss of Jason McGee to injury as early as the 24th minute.

The first quarter was tit-for-tat despite some high-profiled inaccuracies: Kerry’s wunderkinder, Seán O’Shea and David Clifford, who also both created an early goal chance but the latter drew a good save from Patton, were both wide early on and Murphy reciprocated with a 14th-minute free that drifted off course.

Kerry had Geaney on all cylinders and the red-hot Stephen O’Brien flying in for points and the team looked more potent in taking scores, leading three times by two points – Donegal were never more than a point ahead – but the Ulster champions began to find channels through the defence and Ryan McHugh pushed through them with his customary menace.

His marker, Kerry captain Gavin White, with whom he was having a decent tussle, stepped out of line before half-time and pulled down his man, in the process taking a black card. Shortly afterwards, Donegal’s Niall O’Donnell followed for a needless trip on Paul Murphy.

The individual battles were diverting: taking just one, Stephen McMenamin toiled doggedly on Clifford and had his successes but so did the young Kerry star. Also noteworthy were the kick-outs of both goalkeepers. Donegal’s Shaun Patton has been almost a celebrity with the accuracy and distance of his restarts but his opposite number Shane Ryan was also excellent, lapsing a little towards the end.

Nor was all of these easy, short kick-out options. Whereas Kerry were wary of running the full-court presses that obliterated Mayo’s restarts given Patton’s weaponry there was still plenty of pressure. Donegal retained 22 out 25 whereas Kerry managed 21 out of 26.

On the hour with the teams level, Patton was presented with tightly targets everywhere but, soloing out from goal, spotted Ryan McHugh making a break and whipped the ball into his stride. Murphy broke, McHugh passed and Donegal led 1-15 to 1-14.

The edgy score for score trend had continued after the break but in the 45th minute, Geaney struck when a couple of Donegal defenders, apparently totally in control of possession, spilled the ball between them, and the Kerry inside forward swooped, ran in on goal and place his shot beyond Patton for a 1-11 to 0-12 lead.

Eight minutes later, the books were balanced. Replacement Daire Ó Baoill was taken down in the square by O’Brien after a penetrative Donegal move. Murphy almost had the ball in the net before Ryan moved. Donegal led 1-14 to 1-13.

They were nearly in for another goal but Eoin McHugh couldn’t quite flick the ball to the net and caught the ball fractionally on his hands and was deemed to have thrown in the goal.

Down the straight they went, trading scores with such precision that the odd wide (three between them in the second half) felt like the click of an empty barrel in a game of Russian Roulette. They both led three times after 60 minutes and deep into injury-time Paul Murphy, on an advantage from a foul on O’Brien, slotted what looked like the winner.

There was time for one more twist, Brennan being awarded a softish free. Murphy stepped up – quite a bit by the time he actually kicked it.

The Donegal captain had been an immense presence in the fraught closing exchanges, culminating in the equalising free, as the clock ticked into the sixth minute of injury-time. Kerry ended the match with 14 after replacement Tomas Ó Sé lasted less than two minutes before picking up a straight red in the 75th minute.