The Backdoor: Kerry’s curious wait for U20/21 glory goes on 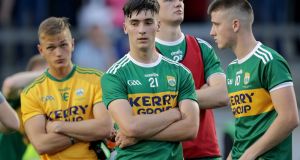 The Kerry Under-20 team after their defeat to Cork. Photograph: Inpho

One team had all the confidence of serial winners, their audacious scoring conveying an utter disregard for the laws of physics; the other team was Kerry, perhaps the sole threat to Dublin’s continued dominance at senior level.

The Munster under-20 football final, it’s fair to say, didn’t exactly play out as anticipated.

The Kingdom – having accumulated five All-Ireland minor titles since 2014, and looking poised to land a sixth – appear at one level to be in a healthier position than pretty much any other county in the country. But something is amiss.

All those minor sides falling drastically short of expectations at the next grade up is an inexplicable case of underachievement, one that has left even the most educated purveyors of the Kerry tradition stewing in a sweat.

Defeat to Cork last Thursday means the period without an All-Ireland title at this level will now stretch to 12 years. That space of time, to highlight Kerry frustrations, has produced six different winners.

Mayo, the last side outside Kerry to win an All-Ireland minor title, were victorious at under-21 level in 2016. The same was the case for Dublin’s minor class of 2012 two years earlier. So what’s happened Kerry since?

While a string of their young talent have graduated straight to senior level, that cannot be the sole excuse for what has become a systematic failure.

For all their success, Cork swept away the Kerry youngsters like championship fodder, strolling to a 12-point win in a similar style to a certain shade of blue in the senior championship.

It was devastating, and regardless of how Kerry’s senior and minor outfits perform over the coming weeks, the inquest will continue in the Kingdom.

After five games in this year’s championship Dublin’s average winning margin is 17.6 points.

For a man who copper-fastened his legacy over a decade ago as one of the greatest minds the game has ever witnessed, Mickey Harte receives an unfathomable amount of criticism. Then again, perhaps the vast majority of that scrutiny comes from a vocal minority who, despite their position, are rarely challenged adequately on their views as pundits.

Of course the Tyrone manager’s approach has its fans and its objectors, the latter perhaps being a more sizeable bunch, but there’s no denying the man’s unrivalled tactical acumen. As was evident on Saturday.

Few managers have the wherewithal to make the bold decisions, the type of decisions that have an entire stadium questioning their sanity, ones that often put the most robust of reputations on the line. Harte has mastered the art.

Against Cork, he made three half-time substitutions when another coach would have made one, symptomatic of a last-ditch effort to rustle up some desire. Others would have waited the obligatory 10 minutes after the break before utilising the powerful curly finger. Not Harte.

The thin line between courage and hastiness is one the 67-year-old has been straddling for years.

Reinforcing the point, he pushed Mattie Donnelly into a more advanced role after half-time and, hey presto, the Trillick man produced a man-of-the-match display.

Condemn his approach all you want, but the man’s still got it.

"Diarmuid Connolly might just be the missing piece of the Dublin puzzle that could turn them into a half decent outfit.” With Diarmuid Connolly returning to the Dublin panel, former Kerry footballer Mike Quirke took to Twitter to share his thoughts on the call-up – with perhaps the subtlest hint of sarcasm.

What could have been

Donegal and Kerry provided a snapshot of what could have been: one of the greatest championships in living memory.

Take Dublin out of the equation and there have rarely been so many contenders vying for top prize. All of Kerry, Donegal, Mayo and Tyrone would have fancied their chances without Dublin on their current procession; Roscommon and Cork, too, would have had reason to be confident. But, to football’s detriment, all eyes were on the Causeway Coast on Sunday afternoon.

For whatever happened between the four sides in Croke Park, it’s hard to generate any sense of anticipation about a championship that has become a fait accompli. The main threats to Dublin performed admirably over the weekend, but they needed to do more again considering the champions are cruising to double-digit wins over other seriously capable sides.

The shadow of resignation has hung over this championship for a while now and no matter what kind of entertainment the Munster and Ulster champions served up – and it was scintillating – the championship will struggle to catch fire down the run-in.

It’s reached the stage Dublin fans, no longer filling the Hill as they used to, are struggling to appreciate their own side’s greatness, perhaps accepting deep down the obvious advantages they’ve been afforded. And that, perhaps, is the greatest shame of all.