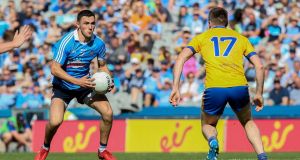 For a GAA annual congress that had one of the lowest-key build-ups in memory - further evidenced when all business was disposed of by the time delegates took an admittedly late lunch - Saturday’s concluding session in Clayton White’s Hotel in Wexford town ended in the words of one very experienced official “with a bit of an edge to it”.

That was principally down to Motion 39, proposed by Donegal, which stipulated that any county in the All-Ireland quarter-final round robin could not nominate Croke Park as a home venue. County chair Michael McGrath scrupulously avoided naming names but it was fairly clear that Dublin was in the crosshairs.

Among his arguments was that using Croke Park twice was a “greater advantage to those who have more use of the venue than others”.

Then a certain frisson entered proceedings with the intervention of Dublin CEO John Costello, who described the motion as “divisive and mean-spirited”.

In a long speech, uninhibited by a couple of rings on the time-keeper’s bell, he laid out a case against, especially in terms of financial loss to the GAA given the differential in attendances between Croke Park and what he said would be Dublin’s nominated alternative, Parnell Park (capacity: little over 8,000).

Donegal’s Séamus O’Donnell took issue with Costello’s depiction of their motion as ‘divisive and mean-spirited’.

“If there’s a situation in our organisation that is unfair, this is the forum where it should be addressed. Let us address the imbalance that’s there. There is one team that gets to play two games in Croke Park.

“The ethos of this association is the games, and to provide games in fairness is what we should be focused on.

“Are we more interested in finances or fairness?” he added in apparent rebuke of Costello’s point. “I would ask everyone to support a motion that ensures a more level playing field for all counties.”

It was defeated 36 per cent to 64 by delegates.

The other main motion saw Congress vote to allow county venues to be used by other sports. Motion 19 gives the association’s Central Council the power “in exceptional circumstances” to authorise use of GAA property for “activities other than those controlled by the association”.

Afterwards GAA president John Horan spoke about references in his annual address to improving the outcomes of disciplinary issues. He said that by reducing the size of committees involved and improving on the training available for members they hoped for “better outcomes”.

“If we had a smaller group of people we could train them better and then we may get better outcomes. Bring them in on a regular basis for training. You may have to scale it back to a three-man committee. It’s a safety mechanism - stops people going rogue. If you have eight in a room, it’s not as easy.”

He also said that the likely special congress necessary to decide on a second-tier football championship, which he supports, would be held in Cork’s Páirc Uí Chaoimh.

In relation to the Fixtures Analysis Committee’s recommendation that All-Ireland club finals be brought forward to January, which he also supports, that proposal can be implemented by Central Council.

Director general Tom Ryan was asked about the motivation for the rejection of the Gaelic Players Association motion that they have representation on the Central Competitions Control Committee in its fixture making function.

“The sentiment was probably that the CCCC try to reflect the various moving parts. I’d imagine that maybe people were a bit reticent to start having players at the table. Is there another group out there that you need to accommodate? Is it in some way an adverse reflection on how they’re doing their job? I don’t think they should feel that.”