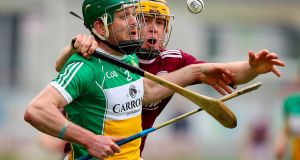 Offaly’s Paddy Rigney is challenged by Davey Glennon of Galway during the Allianz Hurling League Division 1B match at O’Connor Park in Tullamore. Photograph: Tommy Dickson/Inpho

When the Galway team was announced before throw-in with five changes and just four of the starters from last year’s All-Ireland final, it looked like they should be vulnerable. But as expected, the reality proved to be substantially different at O’Connor Park in Tullamore.

With Offaly in serious relegation bother, the understrength Galway team were able to coast to a facile 12-point win win.

The real damage was done in the first half, with Galway having first use of a stiff wind. Without doing a whole lot spectacular, they strode into a 0-6 to no score lead after 11 minutes with Jason Flynn showing deadly accuracy from long-distance placed balls.

The game was 14 minutes old when Joe Bergin registered the first home point from a ‘65’ and they improved a bit after that with Colin Egan getting three from play. Galway, however, were still clearly the better team and a scrambled injury-time goal from Conor Whelan, that possibly should have been a free out after he tussled with Conor Clancy for possession, helped them to a 1-12 to 0-4 half-time lead.

The second half was essentially a non event. Offaly rallied briefly, scoring six of the first eight points to cut the deficit to six points but that was as close as they got. The goals they desperately needed never looked like materialising and once Galway steadied the ship, they closed out the deal with ease.

Three points on the trot took the sting out of Offaly’s challenge and the visitors cruised home in the closing quarter without having to get out of third gear – Brian Colcannon put the icing on the cake with a fine goal deep in injury time.

Here is your handy guide to sport on television this week 17:01
Charles Byrnes can saddle runners ahead of appeal against six month ban 17:00
Leicester’s second-half barrage blows Brentford away 16:51
Joe Root’s mammoth vigil ends on final ball of the day 15:00
Tammy Abraham’s hat-trick steers Chelsea past Luton Town 14:36
Crossword Get access to over 6,000 interactive crosswords