Normal service resumed as Dublin step up a gear 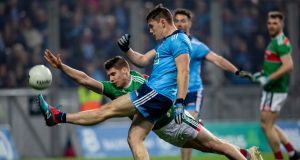 Jim Gavin told us Dublin would come on a ton. No one quite imagined Mayo drifting this far back. So Gaelic football’s world order is restored, complete with plenty of tell-tale signs for the rest of the season.

Some people may still point to Dublin’s secret powers when playing at Croke Park – Congress reconfirming that for two games in the Super 8s this summer – only that won’t begin to explain how poor Mayo were. After three opening league wins, compared to one for Dublin, they virtually collapsed all over the field. For that they only have themselves to blame.

Without goalkeeper Rob Hennelly, who made half a dozen brilliant saves, it would have been a proper drubbing; instead it was just over double scores. Either way Mayo looked bruised by the end, Dublin not breaking any sweat on a near balmy evening by February standards.

In his first hard analysis since handing in his pundit’s badge for the bainisteoir bib, James Horan didn’t hold back on Mayo’s display. Just three points from play? And 14 wides?

“We were tentative, just stood off right from the start, and Dublin were just better than us,” Horan deadpanned.

“Dublin were physical, bullied us a little bit. Simple as that. We got what we deserved and we were probably lucky we didn’t get beaten by more. If you keep giving turnovers away, you’re going to be under pressure, and we were authors of our own doom there.”

For all the hope that Horan’s second coming as Mayo manager might present something different, the disappointment in the end was all too familiar.

“Of course it is,” added Horan. “We were poor, hadn’t conviction in our shots. Any stats you want, they all add up to us getting a fairly comprehensive beating. We were off a lot in the first half, but I did think it should have been a black card for the penalty, and Dublin didn’t get it. That all adds up.”

We’d come armed with stats and ended up extending them: Mayo, seven years and 13 games without a league or championship win over Dublin? Make that 14. Jim Gavin about to lose his first two consecutive league games as Dublin manager? Not here anyway. Five years now since Mayo last scored a league goal against Dublin? See above.

And doubts about Dublin missing a league final for the first time under those seven years of Gavin also disappeared for now.

“A very workmanlike performance from the Dublin players, I thought they were relentless from the very first ball, and created a lot of scoring opportunities, which is very pleasing,” said Gavin. “Good team play overall.”

Fitness and confidence appeared to have come on a ton since that one-point defeat to Kerry two weeks back, as Gavin predicted; only Dublin came on in other ways too, Evan Comerford having a fine night in goal, Ciarán Kilkenny and Cian O’Sullivan making their first starts of 2019, Davy Byrne also back from injury.

Still it lacked any proper edge or excitement for the live crowd of 35,213 – over twice what showed up for the Galway game three weeks back.

Like he did against Galway here there weeks ago, Cormac Costello, operating at corner forward, guided Dublin from the front, finishing with 1-4, two frees, and another man-of-the-match display, one of seven Dublin scorers on the night.

Mayo’s paltry return will be of most concern for Horan: of the newly arriving players Brian Reape, Fionn McDonagh, Matthew Ruane and Ciarán Treacy, only McDonagh and Ruane properly swam, hitting two of Mayo’s only three points from play (Treacy did retire injured before the break).

Aidan O’Shea was effectively marked absent thanks to the close attention of Cian O’Sullivan. Hennelly also finished as their joint top scorer with two placed balls, at least justifying his selection in goal ahead of David Clarke.

Instead, their first point came on 15 minutes from their last man standing – Hennelly coming out of goal to strike over a free. McDonagh did briefly level it for Mayo, before Dublin started hitting where it hurt.

Mannion then had a one-on-one with Hennelly, who just got the block. Still Mayo were hanging on, and on 18 minutes, Costello cut loose on the left of the Davin end to blast past Hennelly. A Mannion free and a Kilkenny fisted-point later and Dublin were up 1-4 to 0-2.

Five years since Mayo last scored a league goal against Dublin, they found themselves with a penalty in the last few minutes of the first half, Doherty obstructed by Jonny Cooper (who was booked, but not black- carded). Doherty stepped up for the shot, excellently saved by Comerford; the only consolation being Hennelly drove over the resulting 45m-free.

The second half played out with all the old rhythm and blues of the league and All-Ireland champions, Dublin happy to keep Mayo at arm’s length while Costello, Fenton and Con O’Callaghan softly killed off Mayo with further points from play.

Mayo had both Lee Keegan and Séamus O’Shea black-carded, O’Shea for a foot-trip on Fenton on 50 minutes; to serve some insult on that injury, Fenton chipped over his point moments after, putting Dublin up 1-9 to 0-5. In the end, unlike so many of these meetings, nothing so breathless that liquid sustenance was essential.