Tyrone finally into their stride with crucial Monaghan win 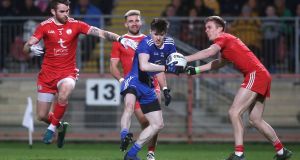 A fixture that normally goes right to the wire was over long before the finish as the Red Hands, inspired by Peter Harte, blitzed their neighbours in a one-sided third quarter.

The in-form Harte had already laid the platform with a brilliant early goal, and went on to finish the game with 1-6.

A first win of the Division One campaign was secured in the face of surprisingly little resistance, and even the brilliance of Conor McManus couldn’t inspire the Farney men as they slumped to a third defeat on the trot and into relegation trouble.

“For once in our lives, we were able to break away from Monaghan. It’s always been a very tough game against them, and there’s never really much of a score-line like that between us,” said Tyrone manager Mickey Harte.

“We had very few wides, but I still think we had a number of good chances that we didn’t take, a few good goal chances, so we have to look into that and hope that we can add to that.”

Peter Harte gave a thunderous early warning of intent with a stunning goal after just three minutes, giving Rory Beggan no chance as the ball rocketed to the top corner.

But Monaghan had their own lethal finisher in Conor McManus, and he had four scores on the board by the 15th minute, hitting three from play off Pádraig Hampsey, and out-fielding the All-Star defender to claim a mark that also sailed between the posts.

A crowd of 5,896 appreciated the quality of entertainment being served up, but it was not to last. When Monaghan had Dessie Ward sin-binned on 32 minutes, they withdrew all 14 remaining players deep into their own half, and an unseemly stalemate ensued, with Tyrone unwilling to be drawn into the defensive trap.

Leading by 1-7 to 0-7 at the break, they managed just one score while their opponents were a man down, but strangely, managed to cut loose once Monaghan were restored to their full complement of players.

Raiding from deep with pace and intensity, the Red Hands reeled off eight points on the spin, with Monaghan struggling to regain their shape.

Harte had a couple from play, and danced through to lob goalkeeper Beggan with a delicate effort which dropped just wide, inches from what would have been a goal for the ages.