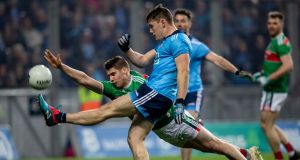 Oh well. We came armed with stats and catchy intros and promptly scribbled them out - Dublin restoring football’s world order with all the familiar rhythm and blues of the reigning league and All-Ireland champions.

Mayo, seven years and 13 games without a league or championship win over Dublin? Make that 14, and counting.

Dublin in danger of missing a league final for the first time under those seven years of Gavin? Don’t bet on it.

Five years and counting since Mayo last scored a league goal against Dublin? See above.

For all the hope and some expectation that James Horan’s second coming as Mayo manager might present something different, that quickly evaporated in a near balmy February night before a live crowd of 35,213 - over twice what showed up for the Galway game three weeks back. Dublin won by double scores and all the time pulling away.

Dublin did play with a little extra drums and bass in defence, only Mayo’s paltry return up front was both telling and disappointing: only two points from play in the second half, plus two frees from Jason Doherty, summed up their evening - the likes of Aidan O’Shea effectively marked absent thanks to the close attention of Cian O’Sullivan.

Like he did against Galway here there weeks ago, Cormac Costello guided Dublin from the front, finishing with 1-4, two frees, and another man-of-the-match display, one of seven Dublin scorers on the night. Dublin might well have had five first half goals were it not for the quite amazing shot-blocking of Rob Hennelly in the Mayo goal; he also finished as their joint top scorer with two placed balls, justifying his selection ahead of David Clarke.

These meetings can be a little unpredictable, only Dublin were in no mood to revive any old scores.

Instead, their first point came on 15 minutes from their last man standing - Hennelly coming out of goal to strike over a free. Fionn McDonagh did briefly level it for Mayo, before Dublin started hitting where it hurt.

Mannion then had a one-on-one with Hennelly, who just got the block. Still Mayo were hanging on, and on 18 minutes, Costello cutting loose on the left of the Davin end, blasting past Hennelly. A Mannion free and a Ciaran Kilkenny fisted-point later and Dublin were up 1-4 to 0-2.

Lee Keenan was black-carded on 27 minutes, for a hit on Darren Gavin, and spent 10 minutes in the sin bin; not long after Andy Moran was gifted a goal-chance, only to blaze it wide.

And five years since Mayo last scored a league goal against Dublin, they found themselves with a penalty in the last few minutes of the first half, Jason Doherty obstructed by Jonny Cooper. Doherty stepped up for the shot, excellently saved by Evan Comerford; the only consolation being Hennelly chipped over the resulting 45m-free.

The second half played all moody blues - Dublin happy to keep Mayo at arms length while Costello brought his tally to 1-4, Brian Fenton and Con O’Callaghan also softly killing Mayo with points from play.

Jim Gavin made his obligatory pre-match changes, O’Sullivan and Kilkenny both getting their first starts of 2019 - O’Sullivan in defence for James McCarthy, Kilkenny up front for regular free-taker Dean Rock.

In th end though it all finished with the sense Mayo were sent straight back to the drawing board. Seamus O’Shea, a half-time was also black-carded for a foot-trip on Brian Fenton on 50 minutes; to serve some insult on that injury, Fenton chipped over a point moments after, putting Dublin up 1-9 to 0-5.

That was game over - and unlike so many of these meetings, no one leaving so breathless that liquid sustenance was essential.