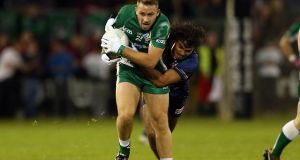 Ireland manager Joe Kernan has called up another additional player for the international rules panel. Former Cork All-Ireland winning footballer Ciarán Sheehan, who spent the last three years in the AFL with Carlton, has been invited to join preparations for the second test this Saturday in Perth.

He comes in together with Monaghan’s Darren Hughes, who arrives on Wednesday in Perth, to strengthen Kernan’s hand after a hand injury ruled out Pearce Hanley and the illness in the team camp that caused such disruption last week continues to place a question mark over the involvement of Sligo’s Niall Murphy and Enda Smith of Roscommon.

Sheehan was one of the brightest talents in the game when playing for the Cork seniors and he earned an international rookie contract in 2014 and joined Carlton in Melbourne, which has previously had other Cork footballers, Setanta and Aisake Ó hAilpín, Michael Shields and in 1990 Colin Corkey on its books.

Unfortunately for the Éire Óg club man his AFL experience was blitzed by injuries and in October of this year he was delisted by the club. He has international rules experience and his two tests in 2013 earned him the GAA medal for player of the series.

Kernan said on Monday that he hopes to see a good turnout from the Irish community around Perth, as Ireland try to overturn a 10-point deficit.

“We all know about the number of Irish people in Perth and the surrounding areas and I hope they all make to the game on Saturday and make themselves heard.

“The game provides a special opportunity for Irish people to re-connect with home and the GAA and with some of the best players in our game wearing the green jersey, we are confident of producing a big performance.”