Ambush in Aughrim proves Dubs less daunting away from home 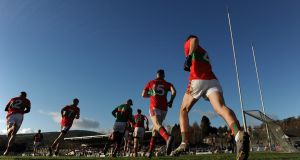 It’s a rare thing for Wicklow to hold some aces on Dublin football. In beating county and provincial champions St Vincent’s in Aughrim, Rathnew not only ended their stellar record in Leinster but also proved that strength and reputation sometimes count for nothing.

In ways Sunday’s game was a microcosm of the inter-county rivalry: the Wicklow champions were given precious little hope against a club that has won 29 Dublin titles, three of the last four Leinster titles, plus three All-Irelands, most recently in 2014. Most of Rathnew’s key players have actually retired from the intercounty scene, while the St Vincent’s game still hinges around club captain and Dublin’s now five-time All-Ireland winner Diarmuid Connolly.

Indeed, the odds for a Rathnew victory drifted out to 66-1 not long after St Vincent’s hit four points without reply early in the first half (according to those who watch these games with one eye on their betting app). Instead, Rathnew had the Dublin champions exactly where they wanted them.

With echoes of Dublin’s last championship defeat to Donegal, back in 2014, Rathnew simply absorbed everything St Vincent’s threw at them, including Mossy Quinn’s goal on 45 minutes, before finishing with one sustained counter-attack – outscoring them 1-3 to 0-0 in the last quarter.

Still, no one is getting carried away, not least Rathnew manager Harry Murphy, who has served considerable time in Wicklow management with club and county. Nothing is won yet, and Rathnew must get past Kildare champions Moorefield on Sunday week before they can think about winning a Leinster title, a feat only once achieved before, in 2001, when beating then Dublin champions Na Fianna.

What Murphy does believe is that this result adds weight to the claim Dublin teams – club or county – are less daunting when surrendering home advantage. The Leinster Council meet on Wednesday evening to agree on all venues for the 2018 football and hurling championship, including Dublin’s football quarter-final against the winners of Wicklow-Offaly, and Murphy believes that Aughrim should be pencilled in, should of course Wicklow beat Offaly.

“Wouldn’t it be great for Wicklow football to have the Dubs in Aughrim?” says Murphy. “Whoever is playing the Dubs, whether it’s Carlow playing them in Carlow, in the early rounds, get the Dubs down here.

“Now, I don’t think we’d beat Dublin if we played them in my kitchen. But get the Dubs down, get the kids of Wicklow in to see them, and promote the game in the weaker counties. But that’s out of my hands.”

Agreement has yet to be reached on any venues for next year’s competition, and, depending on preferences and expected attendances, Dublin could be headed back to Croke Park for the opening game, possibly as a quarter-final double-header with the Meath-Longford game, or the meeting of Kildare and either Louth or Carlow. It may be considered the best way of accommodating the now seven-time defending champions.

After going 10 years with all their Leinster championship games fixed for Croke Park, Dublin went on the road for their last two opening games – playing Laois in Nowlan Park in 2016, and earlier this year playing Carlow at O’Moore Park in Portlaoise. In both cases Dublin won handy in the end.

Sunday’s game in Aughrim attracted plenty of supporters outside of Rathnew, according to Murphy, and the prospect of playing Dublin there next summer would be a nice fillip for the county, including new Wicklow manager John Evans – even if the capacity of just under 10,000 wouldn’t meet the demand of the expected attendance.

“It was a great win, there were a lot of Wicklow people from different clubs, I saw all the faces there. I’m sure John Evans is saying ‘if we can get that belief into the county team’ it will give everybody a boost.

“When you have the Dublin champions chasing shadows there in the last four or five minutes, that’s some achievement. But it was the battling spirit that got us through. We can all play football when we have the ball. But when they hadn’t got the ball, we worked very, very hard. Every one of the lads played a part. That’s all you can ask for. Our lads are a resilient crowd. They battle right to the end. They believe in themselves. It’s a great trait to have, to fight until the end.”

1 Farrell and O’Connell provide insight into changes in Ireland’s analysis
2 Sideline Cut: Vignette shows why Bird is the true shark in The Last Dance
3 Anfield and Cheltenham show sports again lacking in looking after their own
4 Andrew Porter diary: Meat, veg and intermittent fasting the order of the day
5 2019-20 FA Cup final rescheduled for August 1st
Real news has value SUBSCRIBE